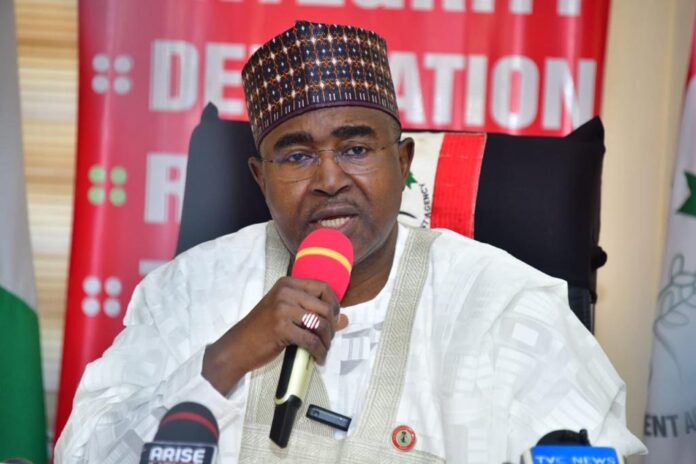 Chairman/Chief Executive Officer of the National Drug Law Enforcement Agency, NDLEA, Brig. Gen. Mohamed Buba Marwa (Rtd) has said that no fewer than 3,733 persons were jailed for drug crimes in the last 2 years he assumed office.

The NDLEA boss therefore warned that unrepentant drug barons and cartels will face tougher times in 2023 if they fail to back out of the illicit drug business.

Marwa gave the warning today at a briefing at the NDLEA national headquarters, Abuja to update the public on efforts by the Agency to rid the country of illicit substance abuse and drug trafficking on the second anniversary of his leadership of the anti-narcotics body.

According to him, “Last year, I issued a New Year appeal to them and also warned that those who refused to heed the warning will find themselves in a difficult situation. Already, we have 34 barons in our net and they are facing the music in court. We have secured orders for the temporary forfeiture of their assets. With our prosecution being topnotch, they can look forward to a long time in prison and final forfeiture of their wealth and assets. Those involved in the illicit drug trade should take a cue from our actions. They can again look forward to a tough time this year.

“The signs are clear: we have already in the first two weeks of this year taken down three major drug cartels, one of which has built extensive networks across the world while at least six of their kingpins are in our custody as I speak. The details you will get to know in the coming days. In these two years, we arrested 26, 458 drug traffickers, among them, 34 barons.

“In 24 months, we successfully prosecuted 3,733 offenders who were convicted and handed various jail terms in court. Of the conviction figure, 2,346 were recorded in 2022 alone, which is the highest in the history of the Agency and almost doubled the highest ever recorded in the 33 years of NDLEA. This is not happenchance but a result of professionalism, determination, commitment and hard work of our officers, men and women.”

Describing 2022 as an epoch year, Marwa said, they took a giant leap in drug demand reduction with the establishment and commissioning of the NDLEA drug abuse call centre which broadened access to treatment and rehabilitation.

“It was a year we had unprecedented support too, notably from the Governors’ Wives Forum which made commitments to broaden and deepen social efforts to ameliorate the consequences of drug abuse. We also had support from our international partners, chiefly the UNODC, counterparts and governments of the United States, France, Germany, United Kingdom, India, and South Korea. The support came in the form of donations of equipment, training, intelligence and other logistics.” He said.

While assuring Nigerians that the Agency is firmly on the task of making Nigeria safe from illicit substances, the NDLEA boss said such may sound like impossibility but “it is achievable. Laying bare how to realise his goal, he said, At our end, we will sustain our Offensive Action and shut down the pipeline from other countries into Nigeria. We shall broaden access to treatment and rehabilitation, and we will continue to carry Nigerians along on this journey to curb the trafficking and abuse of substances in Nigeria.”

He warned citizens to be wary in their dealings with people of questionable wealth. “The anticipated amendment of the NDLEA Act will be this year and that will strengthen the arm of our agency in its drug law enforcement. We look forward to arresting more barons and the 34 in the net presently will know their fate in court in the weeks and months ahead.

“The Proceed of Crime Act 2022 enacted last year has given us new leverage. And I will like to remind those who benefit from the proceeds of drug crimes, this time, families, friends and associates, that our investigations are thorough and where we find any link between a drug baron and private citizens, we shall scrutinize their assets. The onus is now on every citizen, to be honest in their financial dealings with people whose source of wealth is suspect.”

He expressed gratitude to President Muhammadu Buhari and other stakeholders for their support in the total transformation of the Agency.

“We owe a lot of people and institutions gratitude for the turnaround of the NDLEA. First of all, President Muhammadu Buhari, for his tireless support which has been the driving force for change in the countrys drug use narrative. All that has been achieved so far and ongoing efforts are part of the President Buhari administrations agenda for a better country.

“We similarly, appreciate the efforts of the National Assembly, through the two committees in the Senate and House of Representatives that have oversight of the Agency. We also deeply appreciate the Attorney General and the Minister of Justice, Mr Abubakar Malami, SAN, the UNODC, our foreign partners and sister agencies who have all in one way or the other been catalysts to the NDLEA productivity in the past two years. “Again, special commendations for our officers, men and women who are daily risking their lives in the forests, on the streets and dangerous terrains across the country chasing merchants of death and mopping up illicit substances. Youre all heroes!”.