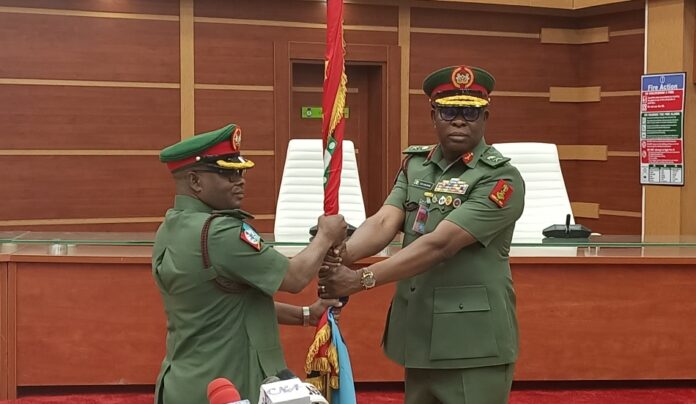 A new acting Director Defence Information of the Defence Headquarters Brigadier General Tukur Ismaila Gusau, has officially resumed office with a charge to all officers and soldiers of the Armed Forces of Nigerians to be prepared to work harder.

Until his appointment, Brigadier General TI Gusau was from Army Headquaters Department of Special Services.

General Gusau who commended his predecessor, Major General Jimmy Akpor for creating better relationship with the media which helped to positively project the operations of the armed forces called for stronger relationship between the military and the media on matters of national security.

“I urge you to provide the enabling environment for members of the armed forces of Nigeria to perform their constitutional roles without distractions.

“As the nation gradually approach the coming general elections starting from next month, I urge you to avoid reports capable of affecting the morale of our gallant troops and the credibility of our armed forces,” he said

General Gusau assured that the armed forces would assist media practitioners to discharge their duties where necessary.

He added that the military would also support other government agencies to achieve peaceful and credible elections across the country.

In his remarks, Maj. General Akpor, the former Director of Defence Information said the media and the military now have deep understanding of their responsibilities.

Akpor, who tagged his speech the “Truth About the Armed Forces of Nigeria”, said the Nigerian military has rich history of great exploits.

He said the Chief of Defence Staff had done so much in forging enduring relationship with the media.

Akpor said this was necessary because the media, like the military, has crucial role to play in creating peaceful and orderly environment for all citizens.

He commended the CDS for holding two media parleys with editors and media chief executives where fruitful discussions led to better understanding of the responsibilities of each profession in furtherance of national security.

He cited the North East where life has been returning to normal due to the efforts of the military after over a decade of insurgency.

According to him, there was bumper agricultural harvest in 2022, and for the first time in 13 years, Independence day parade was held in Maiduguri on Oct. 1, 2022.

Akpor, therefore, urged the media to extend the same support given him to his successor, for him to discharge his responsibilities effectively.

Brigadier General Tukur Ismaila Gusau, PhD mni, was born on January 9, 1969 in the city of Gusau, Zamfara State. Brigadier General Gusau was commissioned into the Nigerian Army after his cadetship training at the Defence Academy on September 25, 1993. He was posted to the Directorate of Army Public Relations (DAPR).

It may interest you to know that General Gusau attended University of Leicester, United Kingdom and bagged a Doctorate degree (PhD) in Management.

The senior officer has attended several military and professional courses commensurate with his rank both at home and abroad. Notably among them are; Young Officer Course (YOC) Infantry, Jaji, Media Operations Course at Koffi Anan International Peacekeeping Training Centre (KAIPTC) Accra Ghana, Logistics Management Course at the Nigerian Army College of Logistics (NACOL) Lagos, Strategic Communications and Public Relations Course at International School Of Communication London and Harvard Kennedy Strategic Leadership Course in the United States of America to mention but a few.

It is important to let you know that, General Gusau was the Public Relations and Liaison Officer to the former Honourable Minister of Defence, Brig Gen MM DanAli (retired). His service at the Ministry of Defence gave him the rare privilege to the insight and understanding of issues and factors that have shaped Nigeria’s Defence policy direction..

He was appointed a Research Fellow at the Nigerian Army Resource Centre (NARC), Abuja. General Gusau proceeded to the prestigious National Institute for Policy and Strategic Studies (NIPSS) Kuru, Jos where he attended Senior Executive Course 43 and was conferred with Member of National Institute, mni.

Apart from other published books and essays by General Gusau, he authored book titled A Collection of Speeches: Mansur Muhammad Dan-Ali as a handy reference document on Defence and strategic studies to enrich knowledge and deepen understanding of Nigeria’s national defence policy thrust in the context of global peace.

It may interest you to know that General Gusau is a member of the following reputable professional bodies; Nigerian Institute of Public Relations (NIPR), Harvard Centre Environmental Research and Education, United States of America and Leicester Centre of Environmental Protection and Sustainability, United Kingdom.

At his leisure time, the senior officer enjoys reading, travelling and jugging. General is happily married and the union is blessed with children.