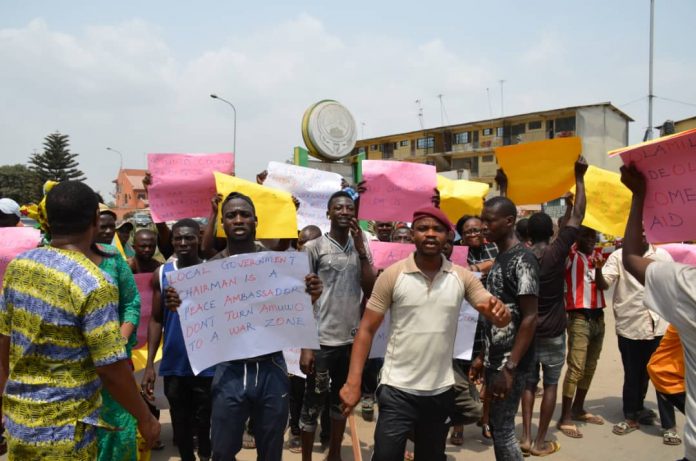 A group of Traders in Agboju market, Amuwo-Odofin, Festac Town, Lagos has appealed to the State Government to stop Lagos Taskforce from demolishing and taking over their source of livelihood in the market. 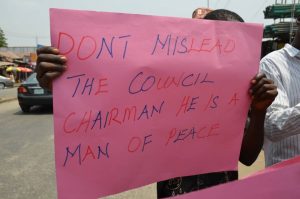 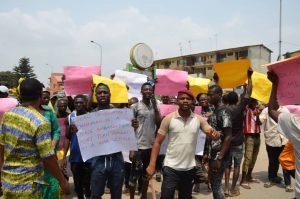 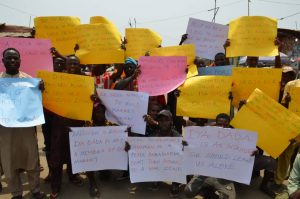 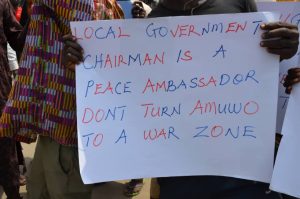 The traders who would be negatively affected by the forceful proposed takeover of the market alleged that one of them has been behind the recent unrest in the market.

In a peaceful protest, the traders who marched to Amuwo-Odofin Local Government Area were seen carrying various placards with different inscriptions like “Sanwo-Olu save us from land grabbers, ‘we are traders not drug dealers’ among others.

The developer of the land who rented out the market space to the traders, Mr. Gilbert Fulani Okereke said he has an agreement with the government sometimes in 2010 and that the late ‘Iya-oloja’ (market leader) Mrs. Abibatu Mogaji was a party to the agreement.

According to the developer, “A committee, which was headed by Mr. S.A Ajose was constituted and I was given the go-ahead to develop the land for a period of 38 years and they promised to give me a letter of approval within 60-days but till this moment, I am yet to get the approval from the government.

“I took loan from the bank to be able to develop the property and when I could not service the loan again, the bank reported to EFCC and I was interrogated until it was clear that I was not embezzling the money”, he said.

Okereke further said the late Alhaja Mogaji was so kind to him, hence the reason why he named the plaza after her to immortalize her, but some persons are instigating the current Iya Oloja, Iyabo Ojo against him to take over the market, saying it belongs to her late mother.

Also, Mr.Emma Onyia, lawyer to Kassy Associates also said the developer, Okereke mhad an agreement with the council and they were given a lease for 35- years and 3 years for the construction of the plaza and for the past ten years, they have not gotten an approval.

“Then came an interloper who is not a party to the agreement and started claiming ownership of the property. The matter is ongoing in the court, yet they have continued to cause trouble in the market. They have invited Taskforce to come and demolish the market”.

One of the affected traders, Ismail Ibrahim, said: “we came here to defend our right. I have been selling in this market for the past 15-years and we are not into sales of illicit drugs as alleged. The betrayer among us has been giving us trouble since she was sent away from the market, threatening us with OPC and thugs”.

Another trader, Ibeh Steven said the matter has started for a very long time, but our attacker (names withheld) would bring touts to the market to harass us.

“We have not done anything wrong, we are doing our legitimate business”, he said.

Efforts to speak with the Chairman of Amuwo-Odofin Council however proved abortive as security agents prevented newsmen from entering the premises.

“They don’t have any excuse. The land belongs to government. They carry out all sorts of illicit activities there. They use drugs freely. We have given them notice and we expect them to comply.”

Grandpa, 21 others arrested over tons of illicit drugs seized in...