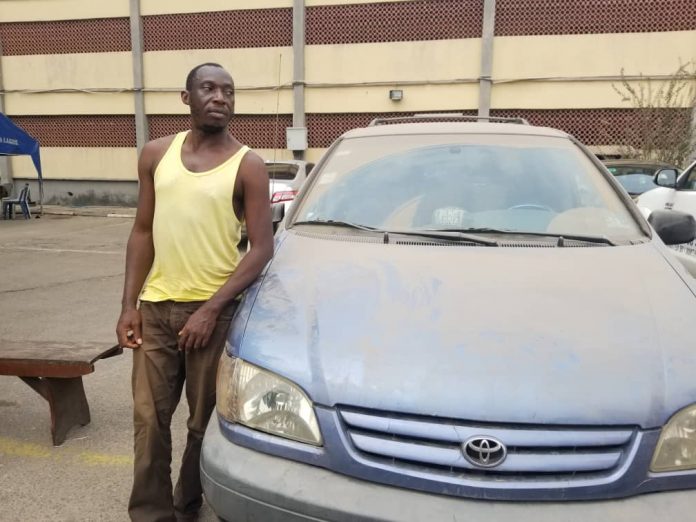 A 50-year-old father of four, Matthew Tokeme who had been using his Sienna Bus for ‘one-chance’ criminal operation in Lagos, has been arrested by operatives of the Lagos State Police Command.

The arrest of Tokeme, who hails from Bayelsa State, followed social media outcry over the criminal activities being perpetrated by the suspect and three of his gang members now at large.

Investigation into the modus operandi of the gang, revealed that they always stationed their bus at different bus stops around Abule – Egba, Ijaiye, Agege and Ikeja, where they pick unsuspecting commuters, between 5.a.m. and 6 a.m., after which they would drive to a lonely path, and rob the passengers of their valuables.

The suspect yesterday, confessed to the crime.

Speaking on how the suspect was arrested, police boss, Hakeem Odumosu said: “On February 3, 2020, at 5 a.m., information received from members of the public revealed that some armed robbers were sighted along Agidingbi road, Ikeja, operating on a Toyota Sienna  bus with Reg. No. APP 488 FH, attacking and robbing unsuspecting victims of their valuables.

“ This is a Toyota Sienna described by quite a number of victims on several occasions, especially on the social media . On the receipt of the information, operatives from Rapid Response Squad (RRS), who have been on the trail of the said vehicle and gang swung into action.

Making confessional statement, the suspect claimed his childhood friend based in Germany, had bought him the bus, to use for transportation business, after his clothing business collapsed.

“ I used to sell cloths at Super market, at Abule -Egba. Business got bad, and I had to sort for help from my friend based in Germany. Last year, my friend bought me the bus to use for transport business.

“ It was my friends, Brown Onyewe and Rashidi, that introduced me to ‘one -chance’ business. They said I would make more money from the business. We often carried passengers going to Victoria Island, from Ijaiye. We would snatch their mobile phones, and other valuables when we get to lonely paths.

“We sold the phones for N5,000 each, and a Laptop we had snatched at one of our operations was sold for N20,000. I was however arrested while I was at home. ”

On the whereabouts of his other gang members, Tokeme said, “ I don’t know where they live. I have never been to their house, as we only spoke on phone and met at specific bus stops for operation. ”