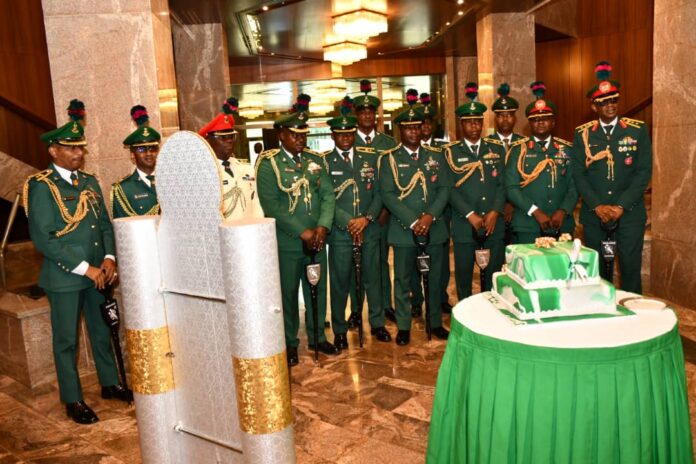 President Muhammadu Buhari of Nigeria has commended the Commander Guards Brigade and his team for their sacrifice and dedication in securing the seat of power.

President Buhari gave the commendation when the Commander Guards Brigade Nigerian Army, Brigadier General Mohammed Usman and some senior staff officers paid him a special visit at the State House Abuja to honour him as he marked his 80th Birthday.

He said the Armed Forces had lived up to expectations in addressing the several security challenges in the country while expressing gratitude to God for keeping him since he became President.

The President reminded them of the tenets of military service which he noted requires self-sacrifice and commitment in a statement by the Assistant Director Army Public Relations Guards Brigade, Captain Godfrey Abakpa.

He assured everyone present and all Nigerians that he remains committed to the service of his fatherland to continue to serve the nation.

The visit according to the Commander Guards Brigade was to specially congratulate the Commander-In-Chief as he clocks 80 years of age and to further wish him many more years of celebration in good health.

Brigadier General Usman further used the opportunity to appreciate President Buhari for providing the Brigade with the requisite platforms needed to secure the Federal Capital and its environs which he affirmed has gone a long way towards ensuring the security of parts of Niger, Kogi, Kaduna and Nasarawa which are neighbouring states to the Federal Capital Territory.

The Brigade presented gift items to the president, which was witnessed by some members of the federal executive council among whom is the secretary to the Federal Government, Mr. Boss Mustapha, Chief of Staff to the President, Professor Ibrahim Gambari and Permanent Secretary, State House, Tijani Idris as well as Commanding officers of the various Guards Battalion under the Brigade.