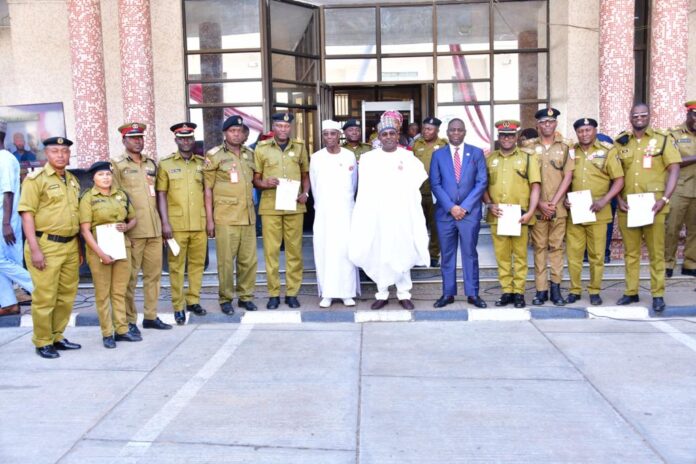 Chairman/Chief Executive Officer of the National Drug Law Enforcement Agency, NDLEA, Brig. Gen. Mohamed Buba Marwa (Rtd) has disclosed that the Agency has in 22 months seized over One Hundred Million pills of pharmaceutical opioid, Tramadol that could have impacted negatively on the youth population and national productivity in Nigeria.

He stated this today during the Commands Awards/Commendations and decoration of newly promoted officers at the Agencys National Headquarters, Abuja.

According to him, Within the period under review, the Agency arrested 23, 907 drug traffickers including 29 barons. Our seizure was over 5,500 tons or 5.5 million kilograms of assorted illicit drugs, which together with cash seized are worth over N450 billion.

In the same period, we have taken the fight to the doorsteps of cannabis growers by destroying 772. 5 hectares of cannabis farms. In these 22 months, we have record convictions of 3, 434 offenders. We have equally made good strides in our drug demand reduction efforts where the number of those counselled and rehabilitated is 16, 114.

The figures are mere statistics until you view them through the lens of human impact and the good or harm that could have come to society, the impact on public health, security as well as law and order if those dangerous drugs had gone to the street. Take, for instance, the one hundred million pills of tramadol seized in the past 22 months. If those pills had gone into circulation and ended up in the hands of young people, it would take a heavy toll on lives, families, productivity and, ultimately, the GDP of the country because it will affect these young people who are the engine room of productivity.

Justifying the essence of the ceremony, Marwa said there is no gainsaying that our dedication to duty has been the driving force behind our good performance; at the same time, it is also not an exaggeration to say that our good performance is catalysed by motivation. As proven right by events in the past 24 months, managements decision to deploy multipronged motivational mechanism to improve the organisations work ethic is part of the recipe for the resurgence of the Agency and the resultant spectacular performance. On that score, management is committed to doing everything possible to improve productivity on the job. Part of that effort is why we are here today, namely the Commands Awards and Commendations.

“We usually calculate our performance as monthly, quarterly or yearly appraisals. But drug law enforcement is generally a continuum, hence, I am wont to always appraise our efforts from January 2021, when we began far-reaching reforms, reviewed our strategies and rejigged the existing systems to accommodate innovations.
From then till now, we have been on an upward trajectory. And indeed, what we have done in the last 22 months, from January 2021 to October 2022, based on the available statistics, is cause for celebration.”

While praising President Muhammadu Buhari for his relentless support for the Agency to succeed in its given assignment, Marwa also seized the opportunity to lead the gathering of officers and their families in singing a birthday song to celebrate him on his 80th birthday.

He charged the officers who were promoted and those who got commendation awards to rededicate themselves while assuring others with such expectations to be hopeful.

“I charge you to take this award as a testament to your professional progress. Beyond that, that you are here today should also be taken as a challenge to surpass your record every quarter and to be resolute to always be part of this bi-annual ceremony. The second leg of this ceremony pertains to the decoration of some officers that were recently promoted. Last year, 3, 506 officers were promoted. This year, a total of 1,018 officers have been promoted to new ranks including two DCGN, 17 ACGN, 29 CN, 78 DCN and 111 ACN. Others are 63 CSN, 106 SN, 129 DSN, 25 ASN I, 400 ASN II, 9 CNA, 44 SNA, 3 NA and 2 NAS I.

“Promotion is a reward for industry, diligence and dedication. It is earned on merit, not given as gratis, and at times, it is subject to vacancy. What that means is that it is not everybody that deserves a promotion that gets it. From certain ranks, there is a limited vacancy in upward mobility. That brings me to this important point: to those whose expectations were not met in the just concluded promotion and harmonisation exercise, I am saying that the process is still on going as management is working to address some complaints. We will continue to put everyone concerned into consideration as soon as there are openings at the higher level.”

He charged the officers not to rest on their oars while also urging them to abstain from any action that could undermine the collective interest of the Agency in ridding the country of illicit substance abuse and trafficking. I am obligated to give kudos for the good job you have done this year. This years performance is a testament to the fact that what we achieved last year was not a fluke. I enjoined us to keep up the good work, but remember, we are on a long journey, there is still long mileage to cover and there is room for improvement.

“Importantly, do not abuse the trust reposed in us by the public. I want to assure you that management is taking care of your welfare, professionalism and work entitlement. President Muhammadu Buhari has done this in terms of welfare packages with his approval of a number of incentives. The barrack project is also in full swing. These are indications that the future is bright for NDLEA officers. Therefore, we cannot afford to have officers that cross the lines in terms of temptations. You have got nothing to fear whether now or in retirement because we now have a good welfare package that should take care of you and your family on the job or in retirement, he stated.