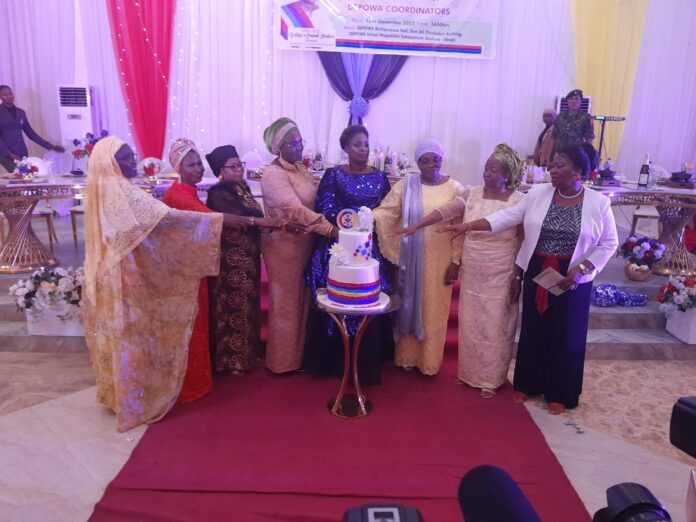 Defence Officers wives have urged women to work together in unity to promote national interest.

The First President, Defence and Police Officers’ Wives Association (DEPOWA), Mrs Esther Domkat Bali gave the advise during the End of the Year Party/Send-Forth in the Honour of Past Coordinators of DEPOWA in Abuja, Nigeria’s capital.

According to Mrs Bali: “women are home builders and as such, there is a need to come together to celebrate and encourage one another for a job well done in building the Nation.”

She noted that the essence of get-together was to ease depression adding that the dancing is in itself a medication.

She appealed to them as mothers and Officers wives to live by example in all ramifications.

The President of DEPOWA, Mrs Vickie Irabor said the contribution of the First President of the DEPOWA in establishing the Association and her motherly advice was worthy of emulation.

Mrs Irabor said: “she will always be properly guided in building on her legacies as a good mother who had been and still there.”

She urged them to enjoy themselves by having maximum fun as senior military wives who are retiring but still full of life.

According to her, both the Muslim and Christians sisters went to the mosque and church to thank God for seeing them through the year 2022 successfully.

It was also an opportunity to be grateful to God for his protection upon them, their spouses and children.

She noted that the Association is particularly grateful to God for the life of one of them, the Coordinator of Armed Forces Command and Staff College in Jaji, Amolara Kuwashe who was kidnapped in Kaduna on 28th March and released on 9th July this year after spending 104 days in captivity.

“You can now understand why we went all out to thank God in showing appreciation to God For His faithfulness towards us”, she said.

The DEPOWA President said that “the Armed Forces of Nigeria in synergy with other security agencies have been able to secure the nation against adversaries; the victory witnessed in the theater of operations across the country is unprecedented”.

She lauded their husbands especially, Chief of Defence Staff and all the Service Chiefs as she thanked all the Officers Wives across the country for their support in encouraging and praying for their husbands and the armed forces of Nigeria and its operational engagement.

According to her, the party is to say well done and thank them all for keeping the home front while their husbands are in the field working to protect them and protect the nation.

She noted some of their achievements this year to include reaching out to the widows of fallen heroes, the effort of making groundbreaking ceremony of the Armed Forces PTSD Center, outreaches to the widows and orphans in their military community were carried, graduation of 126 students in the skills acquisition center were those of the fallen heroes were empowered with Starter Kits, one year rent and stipends to take off their businesses.

According to her, all these were to support their husband’s in the non kinetic operations as she assured them that they would continue to galvanise public support towards the military operations.

She encouraged DEPOWA to keep the tradition of the Association and remain shining examples in the society as military wives.

Three past Coordinators were given gifts for their services to humanity.