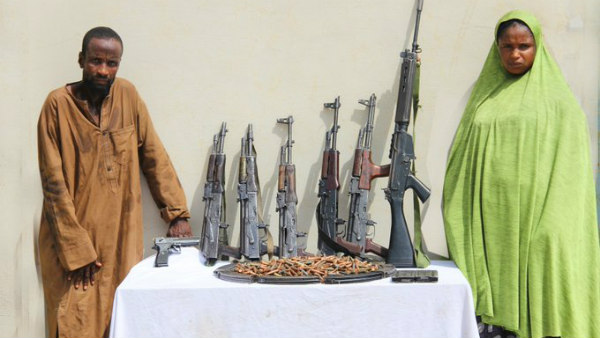 The Nigeria Police Special Tactical Squad (STS) has arrested a 28-year-old female armourer alongside a gang of kidnappers and armed robbers who carry out attacks on people around Sokoto, Kebbi, Kaduna and Niger States.
Force spokesman, Frank Mba, said in a statement on Tuesday that Fatima Garba played the role of armourer for the gang.

“As an armourer, Fatima was responsible for ensuring the safety of the weapons used by the gang whenever not in use. Fatima, who confessed of being the gang’s armourer for over a year, claimed to receive a handsome reward each time the weapons were returned to her after each operation,” Mr Mba said.
“She acknowledged knowing that the arms which she usually kept in a neatly dug hole in her compound were used for robberies, kidnapping and other criminal purposes. Investigations show that Fatima, who is a trader and single mother of two was recruited by her boyfriend Abubakar Usman.”

“Since they began operations, the gang is estimated to have made over twelve million naira from their various criminal escapades,” the statement said.
Mba said the STS also arrested a two-man car-stealing gang led by Bashir Isiaku, 34, notorious for stealing cars from the car park of the Jos University Teaching Hospital (JUTH).
“The arrest of Bashir, a graduate of one of the Federal Polytechnics, came after painstaking efforts and investigations by operatives of the STS to hunt down the criminals.
“Bashir and his accomplice, Aminu Yakubu specialized in using customized master key, crafted out of screwdriver to open and start vehicles.
“Police investigations show that their choices of cars are ones without special security features such as pedal or steering locks. A total of twenty-one (21) vehicles have so far been recovered from the hoodlums and their criminal receivers,” the statement said.

Mba said all the suspects would be charged to court at the conclusion of investigations.