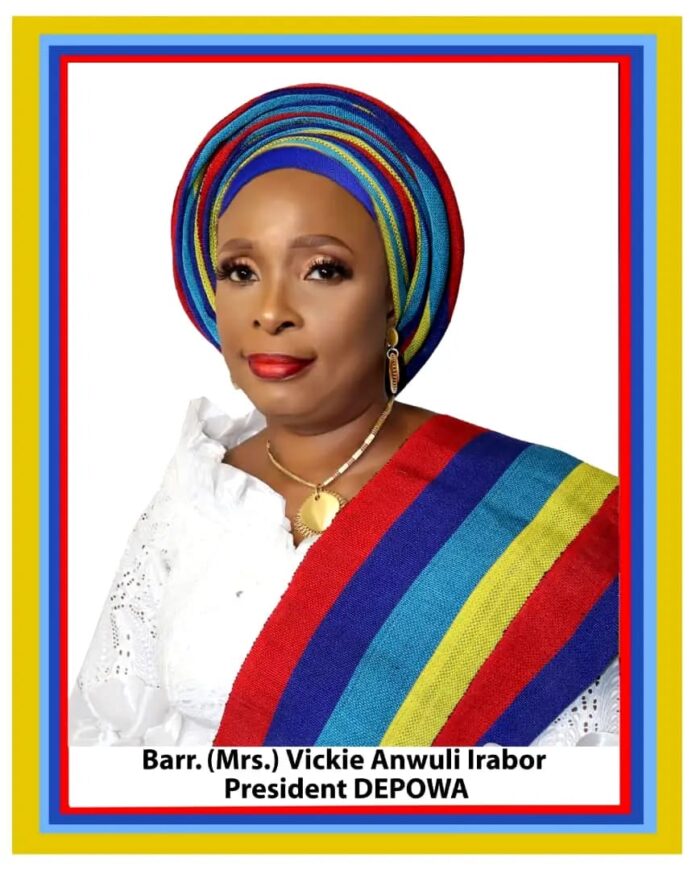 In an iconic move to care for military and police personnel with mental health issues, the Defence and Police Officers Wives Association, (DEPOWA), has laid foundation for a world class Post Trauma Stress Disorder (PTSD) centre in Abuja.

Speaking at the ground-breaking ceremony for the centre, First lady, Mrs. Aisha Buhari noted that she would prevail on the federal government to fund the initiative, which she described as ‘first of its kind’.

She applauded the wife of the chief of Defence Staff for conceptualizing such initiative, pledging to ensure its completion before the end of her husband’s tenure.

According to Mrs. Buhari, “I want to thank DEPOWA for this foresighted vision of establishing a Post Traumatic Stress Disorder (PTSD) Centre for our soldiers. Indeed PTSD is a mental health condition triggered by terrifying events, it is a reality that soldiers and military families have to live with, despite its negative consequences, being a soldier’s wife or a retired soldier’s wife and a wellness expert, I understand the challenges associated with PTSD and its impact on military families and the nation.

“I want to use this opportunity to appreciate members of the Armed Forces of Nigeria for their sacrifices and contributions to nation building. The fallen Heroes remain evergreen in our minds and many with us are wounded physically and mentally, I want to appreciate their wives and families, I want to let them know that the whole nation is with them.

“The PTSD Centre is important to members of the Armed Forces and beyond, because soldiers are the primary victims. This Centre is timely as PTSD is a problem that really deserved solution of this nature and providing facilities for treatment and rehabilitation of patients is key, therefore, fund raising is not the solution, the solution is the Federal Government that sent them to watch front to take responsibility in taking care of the mental health of returnees from war front. PTSD cuts across all ages.

“I thank DEPOWA for this initiative and the military establishment for supporting them, I call on them to ensure that this Centre provides quality and sustained care for soldiers that suffer from PTSD. It is the responsibility of the whole Armed Forces to extract from their budget and build this Centre, Mrs Irabor, it is no longer your project, it is my project and the project of Mr. President, we are going to work round the clock to make sure that it is completed and commissioned before we leave office.”

President of DEPOWA, Mrs. Vickie Irabor noted that the rehabilitation centre will evaluate, counsel and provide adequate support to personnel and their spouses prior to reintegration at the end of their operational tour of duty.

According to the lawyer, “With gratitude to God Almighty, it gives me great pleasure to welcome you all to the ground-breaking and foundation stone laying ceremony of this historic and first of its kind, transformative Armed Forces Post Traumatic Stress Disorder (PTSD) Centre. This is a project that is very dear to my heart and indeed the hearts of all military wives across the Country.

“Let me begin by expressing my profound appreciation to the First Lady of the Federal Republic of Nigeria, Her Excellency, Dr. (Mrs.) Aisha Muhammadu Buhari, our Mama, the mother of the nation. We appreciate you for your leadership and continued support for DEPOWA. It is indeed an honour to have you here Your Excellency. As a military wife yourself, you remain inspirational to us, and indeed to all Nigerian women, in your dutiful support to Mr. President.

“May I also seize this opportunity to thank the Armed Forces, led by my darling husband, the Chief of Defence Staff, General Lucky Irabor; As my husband, you have given me the wings to fly and soar very high. I appreciate your love and support all the way. Sweetheart, you are the best! I thank the Service Chiefs, Leut Gen. Farouk Yahaya (COAS), Vice Admiral A.Z. Gambo (CNS) and Air Marshal 1.0. Amao (CAS) who keyed in by matching their words with actions from the inception of this project. This Indeed is a testament to your commitment to exceptional service delivery of a professional Armed Forces. We owe you and the armed forces a debt of for your sacrifices. You are deeply appreciated.

“More than 20 years ago in Lagos, stood with my five-year-old son waiting at the military wing of the Murtala Mohammed Airport, Ikeja with many thoughts running through my mind. Will my husband return to me alive, will he be injured, will I need to make life adjustments to cope with any issue we would face once the reality or outcome before me was known?

“Two years before this moment, my husband was deployed to Liberia and then to Sierra Leone under the auspices of ECOMOG to fight the war that later stabilized these Countries. After such a long time away without much contact, I got the message that he was finally to return home. This was long time before GSM phones and other communication tools were available in Nigeria and so my confirmation of life would only come if saw him walking down the ramp of that C130 Military Aircraft.

“As stood there that faithful sunny day, the first set to get off the plane, were the bodies of our fallen heroes, wrapped up and my heart broke! Next set were wounded soldiers who were carried down from the plane with stretchers, with limbs wrapped up with white gauze, with shouts of excruciating pain, as they were laid on the soft green grass to be taken to Yaba Military hospital. Still, my husband was nowhere in sight and my thoughts went very far. I continued to wait and then the men who had survived this ordeal began to disembark. Finally, I saw him, though in quite an unrecognizable state. He had gotten considerably darker with extremely dry skin, but all these did not stop me from bowing my heart to thank God for bringing him back home, alive.

“Fast forward to my present role as President DEPOWA over two decades later and leading an Association of women bound together by marriage to Military and Police Officers in Nigeria, I was confronted by the image of that moment of waiting at the foot of the aircraft. It kept coming back and I allowed myself to think deeply not only about my experience that day, but that of my husband, the injured men, the wives who became widows, the children who became fatherless, the personnel who had to leave the service as a result of their injury, the trauma the men, the wives and children must have experienced and the many years that have passed with these unspoken experiences not discussed.

“The effects of these experiences in our barracks community and the extreme burden it placed on military families have kept me wondering “how did we survive these experiences as a community because they remained unspoken, unheard, and therefore untreated” I realized that indeed, all of us, the Officers and men, wives and children were true victims of war and peacekeeping!

“Mulling over these thoughts, I was also confronted with stories from wives of personnel who had faced much worse and couldn’t speak out about the challenges and the traumatic experiences, such as insomnia, nightmares, substance abuse, violent outbursts on members of their family and society, and even suicidal tendencies. Uniting our voices as mothers and wives, we decided not to remain silent.

“In our review of Research conducted, we have identified the extraordinary challenges being faced by officers and soldiers on the frontlines in securing our nation by fighting terrorism, banditry, and other societal ills. Some of these challenges range from physical injuries, mental health issues, and sometimes, sadly paying the supreme price in the defence of our dear nation Nigeria.

“While we have hospitals to take care of physical injuries, we have realized that there is a huge gap in mental health responses globally, including Nigeria; especially in the treatment, management, and rehabilitation of PTSD faced by families in the Armed Forces.

“In response to these issues, DEPOWA, under my leadership decided to pursue the implementation of a novel, first-of-its-kind, Legacy-based Armed Forces PTSD Centre.”

“When completed, the centre will help evaluate, counsel, and provide adequate support to personnel and, by extension, their families before reintegration from conflict zones. It will also help to enhance national, regional, and global stability, as well as help, boost military capability to continue to deal with all forms of insecurity.

“I believe that establishing this facility will be a step in ensuring the stability of military families post-conflict engagements and encouragement to officers and soldiers that help is available should they need it after assignments. The facility will also serve as a repository for future research on mental health challenges in the Armed Forces of Nigeria.”