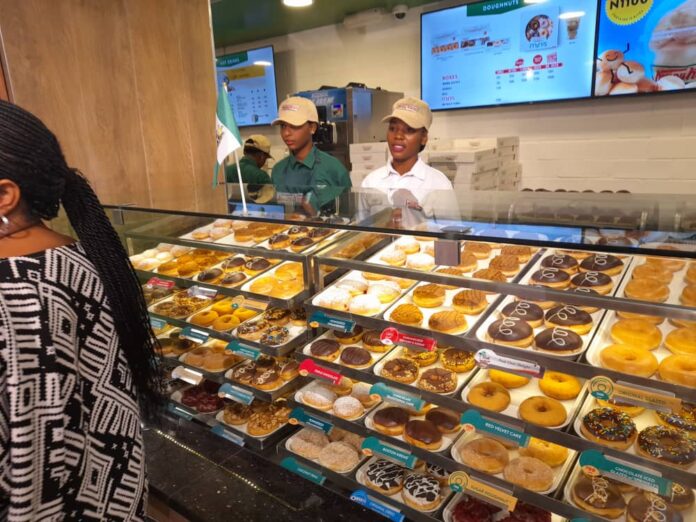 Krispy Kreme Doughnut has made an amazing debut in Abuja, with dozens of free Doughnuts shared to customers who stormed their new shop in Novare Mall, Wuse Zone 5.

The company was also supported by Coca-Cola company, which shared its product free of charge to first customers.

Krispy Kreme’s story began in the late 1930s, when Vernon Rudolph, the man responsible for these heavenly delights, bought a secret recipe for yeast raised doughnuts off a French chef in New Orleans.

He then rented a building in Old Salem in Winston-Salem, North Carolina and sold Krispy Kreme doughnuts to grocery stores originally as a wholesaler. However, the delicious scent of cooking doughnuts drifted into the street and was too difficult to ignore, causing passers-by to stop and ask if they could buy hot fresh doughnuts.

Vernon saw this as an opportunity to create a retail business and cut a hole in the wall of the building to start selling directly to customers.

Krispy Kreme doughnuts are made fresh daily, delivering delicious taste and many joyful experiences across the world. The good news is that this iconic brand has made its way to Africa’s most vibrant city of Abuja, with its first store opening at Novare Mall, Wuse Zone 5.