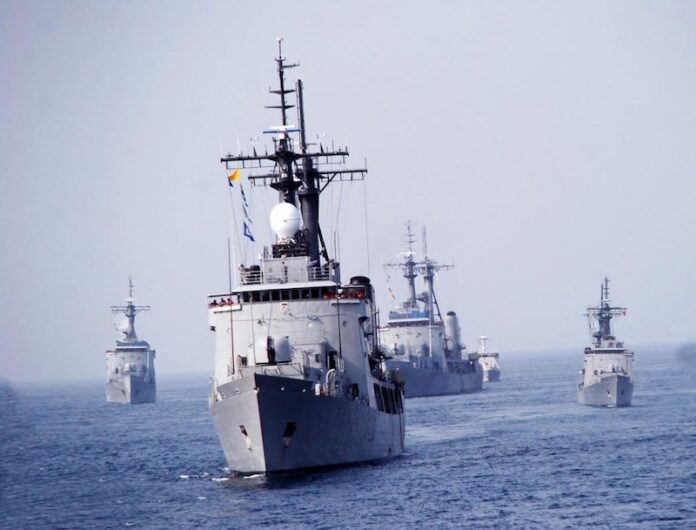 The Navy clarified that the Ship, which invaded the Akpo Oil Field without any form of authorization or clearance, stormed out without lifting any crude when it sensed the presence of a Navy vessel, before it was apprehended at Bioko Island in Equatorial Guinea.

Speaking at a briefing at the Naval Headquarters, the Chief of Policy and Plans, Nigerian Navy, Rear Admiral Saidu Garba, disclosed that, “while on conducting routine monitoring of the maritime domain, on August 7, 2022, it was observed that a very large crude oil carrier MT HEROIC IDUN entered the Nigerian maritime environment and headed for Akpo Field without any form of authorization or clearance.

“MT HEROIC IDUN (IMO:9858058) is registered in Marshall Island with an overall length of 336 meter and capacity of three million barrels. The vessel arrived Akpo Field midnight on 7 August, 2022, with the obvious intention of lifting crude oil within the field”.

He added, “this was, however, spotted by by the Nigerian Navy Maritime Domain Awareness facility which probed the legitimacy of the carrier’s presence in the Total SA operated Akpo Field. The outcome of all relevant enquiries from the controlling agency, NNPC Ltd, revealed that the vessel was not cleared to be in Akpo Field.

“This necessitated the deployment of the Nigerian Navy Inshore Patrol Craft, NNS Gongola, to investigate the tanker’s activities. NNS GONGOLA arrived arrived Akpo Field and interrogated the MT HEROIC IDUN on her mission and approval status. The Captain of the vessel duly responded and further stated that it was without relevant clearance to operate in the Field. Accordingly, the vessel was in line with normal procedure, ordered to turn around and follow NNS GONGOLA to Bonny anchorage.

“However, the Captain after contacting the Master/Shipping Agent, refused to cooperate with NNS GONGOLA and stated that she had been told not to take directives from the Nigerian Navy Ship.

“Apart from resisting lawful arrest, the Captain of the vessel, made a broadcast of false piracy attack call to IMB Piracy Reporting Centre to mislead.mariners that NNS GONGOLA was a pirate vessel, in order possibly concoct an alibi for her desperate action.

“The brazen act of defiance to constituted authority by the Captain of the vessel, necessitated the Nigerian Navy to invoke the collaboration of neighboring Equatorial Guinea to arrest the vessel. The Equatorial Guinea Amphibious Ship, CAPTAIN DAVID was therefore vectored to intercept and arrest MT HEROIC IDUN on 12 August, 2022. The vessel is currently being held at Luba Anchorage in Bioko Island, Equatorial Guinea, where the country is conducting her investigations, while we await diplomatic procedures for handing over to the Nigerian Navy”.