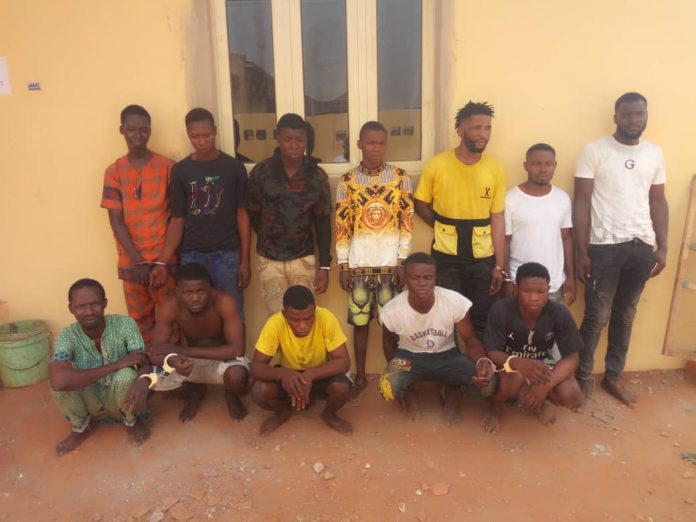 The Lagos State Police Command has arrested no fewer than 17 suspected cultists and gang members disturbing public peace at Ijora Badia area of the state.

In a statement by the command spokesperson DSP Bala Elkana, and made available to newsmen today in Lagos, the cultists belong to two notorious  confraternities.

According to Elkana, “On February 21, 2020 around  2.20pm, Ijora Badia Police Station received a distress call that two rival cult groups armed with cutlasses and other dangerous weapons, engaged themselves in a battle for supremacy at Iso Isu area Ijora Badia and inflicted various degree of injuries on each other.

“Police operatives from the Division and Special Strike Force on Social Miscreants from the Command Headquarters, Ikeja were mobilised to the area. Five suspects were arrested.

In a related development, Ikorodu Police division on today around 11.am, received information that members of two rival confraternities attacked each other at Ladega area Ikorodu and one Lateef Ganiyu Akinpelu a.k.a Eti, 24, was seriously injured.

According to Elkana, police operatives from Ikorodu division, Area ‘N’ command, Shagamu Road, Ipakodo, RRS and SARS were mobilised to the scene.

The injured person was rushed to General hospital Ikorodu where he is currently receiving treatment. Twelve suspects were arrested. They are: Ajayi Ibrahim; Isiaka Abdullah; Yusuf Balogun and nine others. One locally made pistol was recovered. Investigation is ongoing, the suspects would soon be charged to court.