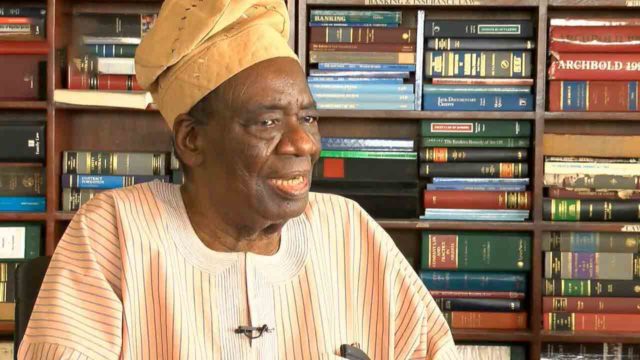 Former minister of justice and attorney-general of the federation Chief Abimbola Osuolale Richard Akinjide is Dead. The 88-year-old legal icon died in his Ibadan, Oyo State, home.
A family source said he died around 1 am. The Senior Advocate of Nigeria had been indisposed for about three years
According to a source close to the family, the remains of the legal luminary has been deposited at a morgue.
Born in Ibadan, the Oyo State capital in the early 1930s to an influential family of warriors, the late foremost lawyer and Ibadan high chief attended Oduduwa College, Ile-Ife from where he passed out in Grade One (Distinction, Aggregate 6).

He travelled to the United Kingdom in 1951 for his higher education and was called to the English Bar in 1955 and later to the Nigerian Bar. He established his law firm, Akinjide & Co soon after.
The frontline Yoruba leader was a Minister of Education in the first republic, during the government of Prime Minister, Alhaji Tafawa Balewa and Minister for Justice in the second republic, during the administration of President Shehu Shagari.
He was a member of the judicial systems sub-committee of the Constitutional Drafting Committee of 1975-1977 and later joined the National Party of Nigeria in 1978. He became the legal adviser for the party and was later appointed the Minister for Justice.

The late Akinjide also serves as a chieftain in the Olubadan of Ibadan’s court of clan nobles. As Attorney General, it was under his watch that Nigeria temporarily reversed executions of armed robbers. The Abolition of a decree barring exiles from returning to the country.
He was the lead prosecutor in the treason trial of Bukar Zanna Mandara. The eviction of many illegal foreign nationals from Nigeria which contributed to mild violence against some foreigners in the country. The event also exposed some weaknesses within the West African economic community.
He was a chieftain of the Peoples Democratic (PDP).