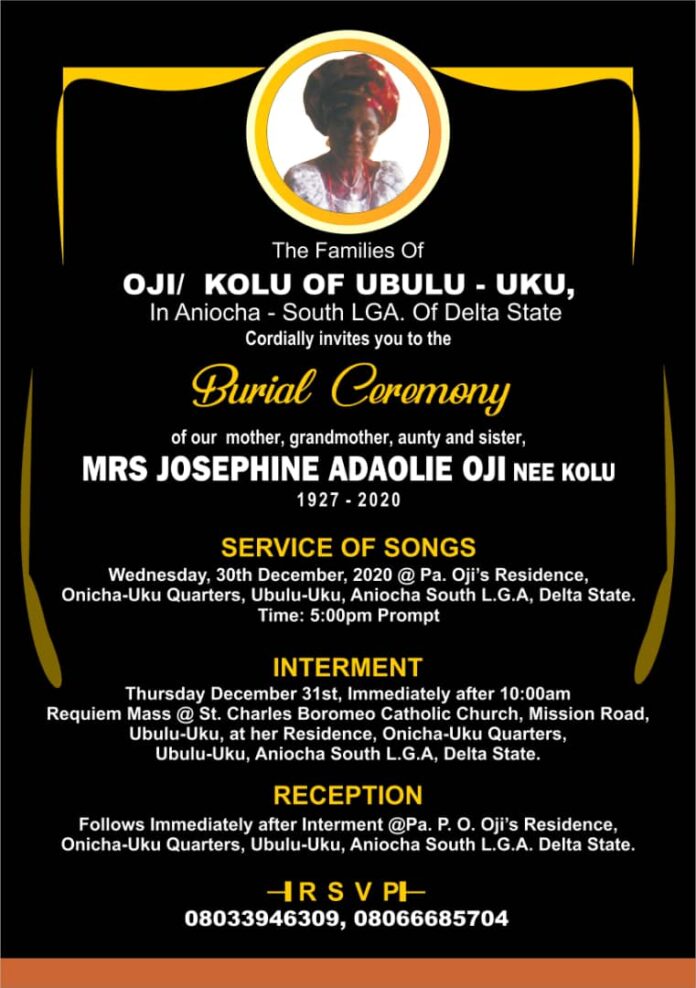 Former President of the Crime Reporters Association of Nigeria (CRAN), and an Assistant News Editor with the Sun Newspapers, Comrade Christopher Oji has lost his mother , Mrs Josephine Oji .
Mrs Oji died at the age of 93 on November 7 after a brief illness.
Comrade Oji in a statement made available to Journalists ,said his mother ,a devout Christian , would be buried on December 30 to 31(New year Eve) at her residence , Hon. Paul Oji compound ,Onicha- Uku Quarters, Ubulu-Uku in Aniocha – South Local Government Area of Delta State.
He Stated: ” Our mother , a business woman will be buried at Hon Paul Oji’s residence Onicha-Uku Quarters,Ubulu-Uku.Service of songs is on December 30 while internment will be on Monday , December 31 after 10 am Requim Mass at St Charles Boromeo Catholic Church Mission Road Ubulu-Uku Delta State. Reception will follow immediately at her residence.
” Our mother will be greatly missed .Mrs. Josephine Grace Adaolie Oji (a.k.a Mama Ojunwa) was born on August 25 , 1927 to the family of Late Pa Mukolu of Ogbeani Quarters and Mrs. Lucy Ekwutoziam Mukolu (Nee Onwubuya) of Umueneada, Isho Quarters , Ubulu – Uku Aniocha South Local Government Delta State. 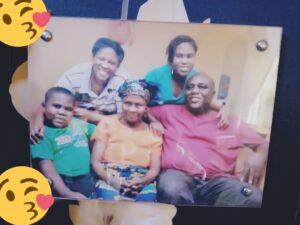 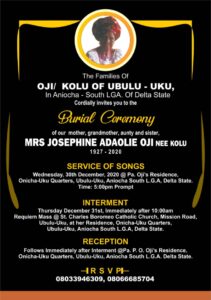 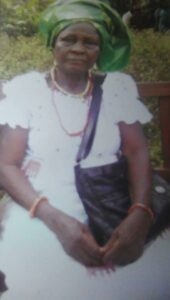 As a virtuous young woman, her good character attracted Young , Teacher of great repute ,Mr Paul Okolie Oji, grandson of great Paul Onwueme in Onicha-Uku, in Ubulu-Uku. Mama was an Anglican faithful while Paul was a Catholic. In August 28,1950 Mama wedded Pa Paul Oji at Ogwashi-Uku Catholic Church. Her Anglican name was Grace while the Catholics gave her Josephine. She is popularly called “Gracy”. Mama’s husband was a young talented teacher and this took Mama to various localities such as Ute Ogbeje, Idumuje Unor, Obomkpa, Onicha-Ugbo , Idimuje Ugboko and others when the husband was on posting. Mum had a blissful and uninterrupted marriage with her husband until 2005 when her husband departed this sinful world”.