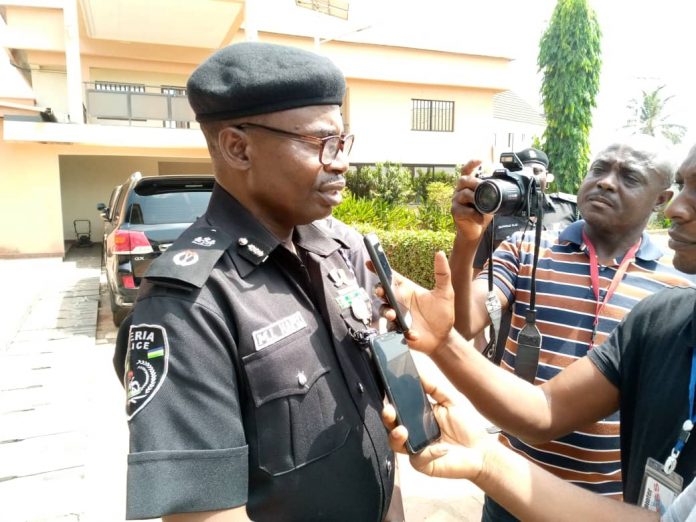 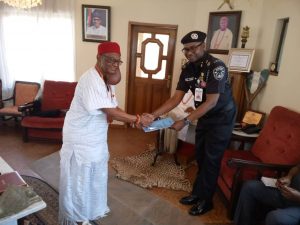 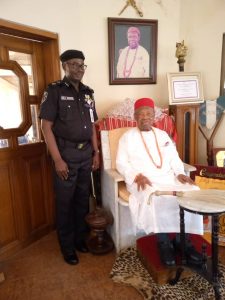 The Asagba was very clear in welcoming the Police Commissioner who is not a stranger in Asaba, but as one who has returned to serve the State in the capacity of a Commissioner.

“You are familiar with the terrain and so I welcome you back. I thank the Inspector General of Police for sending us a brilliant CP with superb academic qualification to police Delta State effectively.

” We recognize that you have come to work for us; and so it is our responsibility to give you all the necessary support. In Asaba, you might not be totally familiar with the terrain, therefore, you have the Asaba Community Police headed by Nnamdi Chukwuedo to work with you by assisting you to have your job of policing done”, Asagba assured.

Addressing the Asagba and his council, the Commissioner of Police, Afiz Mohammed Inuwa commended the Asagba for receiving him on such a short notice.

He acknowledged that the visit was not his first, but definitely his first as a CP. He thanked the monarch for his blessings to him during the time of his former boss, CP Ikechukwu Aduba, adding that such blessing had continued to propel him and brought him back to serve in the State as CP.

According to the CP, “This my second sojourn in Delta is not going to be easy until we stand up to do what is expected of us. Since my arrival, we have deviced various ways to combat crime in the State, which is predominantly centred around armed robbery, kidnapping, banditry and mostly cultism.”

The CP who hinted that in his first week in the State, criminal hideouts had been raided and most criminals in the areas raided were arrested and others dislodged.

Mr Inuwa therefore, pledged to work with the Asagba and his people based on information and collaboration. “I have instructed my Area Commanders and DPOs to collaborate with members of the society for information gathering and processing with a view to preventing crime”, he said.

The CP nonetheless, reported the recent sad commentary where his men on stop and search were attacked with matchetes, subdued and disarmed with two fire arms stolen from them.

He further affirmed his readiness to work with the vigilance group, stating that gone were the days when the police would see vigilante as a rival organization.

His words, “The vigilance groups are partners in progress. They are members of the public who came together to fight a common course. I have told my DPOs that any community without a vigilance group should be organised to form one.”

Earlier while introductions were made, the PPRO of the Delta State Police Command, DSP Onome Onovwakpoyeya had read the intimidating resume of the CP who is a graduate of Mass Communication and of course his exploits when he served in Rwanda.

Same was with the Asagba Prof. Chike Edozien who was eminently introduced by the highly cerebral Iyase of Asaba, Obi Isioma Goodluck Onyeobi.

The elder statesman had gone ahead to give a detailed history of Asaba to the CP and his entourage, thereby welcoming them to enjoy their stay in Asaba where according to him, “You will discover another heaven if you marry an Asaba woman”.