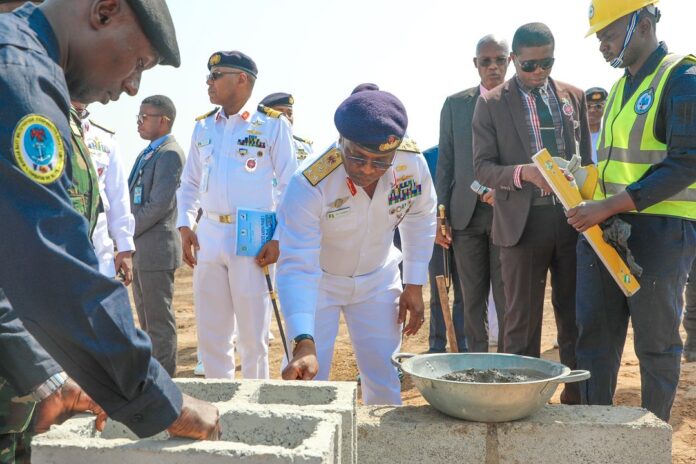 The two estates are parts of the many developmental projects the naval boss has accomplished since assuming office.

Pundits have described Vice Admiral Gambo as ‘square peg in ‘square holes’ especially for his knack for welfare of his troops and unprecedented acquisition of platforms under his watch.

His reign would also be remembered for taking Nigeria out of the dull drums of world piracy watch list.

“Pertinently, access to adequate housing has long been viewed as the second most essential basic needs of mankind outside food. It is considered to be an integral factor to derive satisfaction in economic, social and cultural rights. Accordingly, it is commonly accepted that the well-being of both individuals and families is substantially affected when the need for satisfactory housing is not met.

“While various governments at the Federal and State levels have in the past made efforts at improving housing situation, the supply still falls far short of the housing needs. The Nigerian Navy through the Navy Holdings Limited and its subsidiaries are contributing their own quota to meet the housing needs of both its personnel and the public. However, housing financing has become one of the most important factors affecting housing delivery.

“This is surely a step in the right direction. To our developers, your selection as preferred partners for this all-important project means a lot towards the actualization of the Nigerian Navy housing dream. Accordingly, it is expected you remain committed to the ideals of delivering quality, decent, comfortable and safe housing in line with the agreements signed and within stipulated timelines for delivery.

“I therefore charge both consultants and developers to spare nothing towards ensuring that the vision and concept for this development are achieved to the latter and in line with industry and global best practices. There should be no short-cuts at the expense of safety and quality delivery and hopefully this project would be a reference point for other developments being planned by the Nigerian Navy in Abuja and other states of the country.”

Speaking at the foundation stone laying ceremony of Navy Estate Karshi Phase 3, he noted that his administration was committed to the welfare of officers and ratings of the navy.

According to him, “On behalf of officers, ratings and civilian staff of the Nigerian Navy, I have the honour to heartily welcome everyone to another unique milestone in the comprehensive Nigerian Navy transformation plan, which is the Foundation Stone Laying Ceremony to flag-off the Post Service Housing Scheme estate development for the Navy Estate Karshi.

“I am particularly delighted that you honoured our invitation, despite the short notice. Distinguished guests, ladies and gentle, no doubt food, shelter and clothing remain the 3 basic necessities of humankind and certainly, housing constitutes a very significant part as the second most essential basic need, where an individual grows and matures as a dependable part of society. Accordingly, the impact of affordable housing to personnel welfare cannot be quantified as it is adjudged as a veritable tool for motivation and boosting morale in the Service.

“In this regard, the Nigerian Navy over the years continued to prioritize home ownership in the hierarchy of its preferences. This resulted in establishment of the Nigerian Navy Post Service Housing Scheme Limited in November 2009 and subsequently, renamed Naval Building and Construction Company Limited on 5 July 2015.

“The Company has constructed the Navy Estates Karshi Phases 1 and 2, whose allocations are dominated by Nigerian Navy personnel both serving and retired. Allocations were equally extended to members of the public to deny it a barracks status, being a post Service housing scheme. The Naval Building and Construction Company Limited also moved on to establish the Navy Town Estate Asokoro consisting of both Nigerian Navy personnel and civilian subscribers.

“However, the above-mentioned Navy Estates did not capture the interest of ratings. It is against this backdrop that the Navy Holdings Limited and its subsidiaries are collaborating to provide affordable housing to personnel with peculiar consideration for ratings at the Navy Estate Karshi Phase 3.

“To further enhance subscription by ratings towards mitigating housing challenges faced on retirement, 60 per cent of the allocations in the 7.8 Hectare estate would be availed to ratings, while officers and members of the public would subscribe to the balance of 40 per cent. Furthermore, affordable mortgage templates would be made available to interested personnel to key into the low-cost housing estate. These efforts underscore the premium placed on personnel welfare to enhance operations effectiveness of the Nigerian Navy.

“It is therefore instructive that the Nigerian Navy personnel and particularly ratings take advantage of this rare opportunity to own a home of their own. On this note, the Naval Headquarters will work-out plans to assist the Navy Holdings Limited fast track infrastructural development of the Navy Estate Karshi, Phase 3. In addition, the Nigerian Navy through the Navy Holdings Limited is working with some state governments to acquire land for development towards cushioning dearth of affordable housing for personnel.

“Pertinently, a process of developing post service housing is about to commence on 10.3 hectares of land allocated by Lagos State Government at Tokpo Badagry near ASCON. Kaduna State Government has also allocated 3.36 and 2.75 hectares of land for Post Service houses and residential officers’ quarters respectively at the Millennium City 2 in Kujama as well as another 1.8 hectares for CNS Guest House in Mando.

“Recently, the Executive Governors of Akwa Ibom and Imo States approved the allocation of 200 hectares of land respectively to facilitate housing developments, which will benefit naval personnel as well as civil servants of both states. In addition, discussions are ongoing with governments of Adamawa as well as Lagos states including the Federal Capital Territory for allocation of land.”