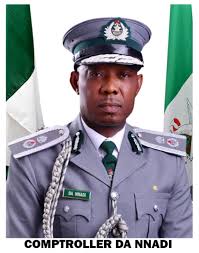 The Comptroller General of Customs Col. Hameed Ibrahim Ali (Rtd.) has approved the deployment of Comptrollers to various Units, Departments and Commands across the country.

As part of the overall promotion and shake-up in the hierarchy of the Nigeria Customs Service.

It was gathered from the long posting list that the NCS National Spokesperson, Comptroller Timi Bomodi has now been promoted to head the Kirikiri Lighter Terminal (KLT) in Lagos, while anti-smuggling Czar; Comptroller Dera Nnadi now heads Seme Area Command.

Comptroller Auwal Mohammed from Port Harcourt Area 2 command has been assigned to fill-in the very big shoes pulled down at Apapa Command by Comptroller Yusuf Ibrahim Malanta who was the highest revenue mobilizer in the history of the service.

Others are; Comptroller OA Salefu for Western Marine Command Lagos, Comptroller AM Ibrahim for PTML Terminal Lagos and Comptroller M.S Yusuf for the Murtala Muhammed Airport command in Lagos.

Nnadi, an anit-smuggling czar, was a former spokesman of NCS Apapa Command. He was also Deputy Comptroller in charge of administration at the Ogun 1 command and later became the Comptroller.

He was also the Deputy Comptroller in charge of Enforcement at the Tin Can Island Command, during which outstanding seizures comprising large cache of arms and ammunition, illicit drugs including large quantities of outlawed tramadol and many other contraband goods were made.