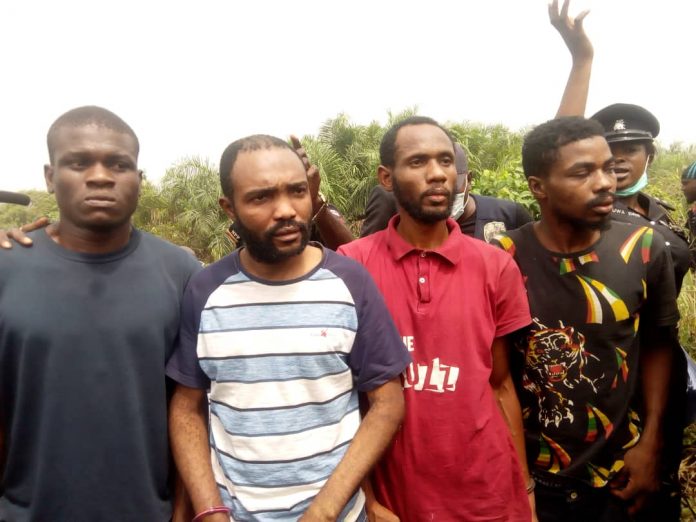 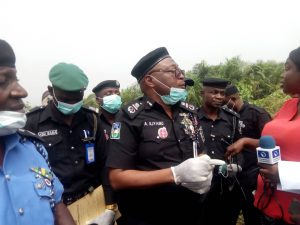 Prime suspect in the murder of popular Abuja businessman, Chief Hyginus Odunukwe, Daniel Bob Ibeaji, today, gave a starling revelation on how he conspired with three others to snuff life out of him at Artican Beach Resort, in Ajah area of Lagos, on December 1,2019.

His three accomplices: Arinze Igwe, 26; Solomon Cletus 30 and Israel Obigaremu, 35, who were arrested alongside Ibeaji, also stated their roles in the act.

Ibeaji who claimed to have studied Medicine and Surgery in Edinburgh, the United Kingdom, disclosed that the deceased was first hit with an axe on the head before he was injected with a lethal Injection and strangled.

Trouble, started after the deceased, who was into estate development and Gold mining, was approached by the prime suspect in respect of one of his buildings he displayed for sale in Abuja.

Late Odunukwe, left his Ikoyi, Lagos home on December 1,2019, having informed his family that he was going to meet the supposed buyer but he never returned home.

His body, which was cut into pieces was recovered by operatives of the Zonal Intervention Squad (ZIS) of the Zone 2 Command, last week, in a canal in Ogombo forest along Ajah road, while his  4- Runner SUV was  tracked to Artican Beach Resort .

Explaining why the late businessman was murdered, Ibeaji ,who was paraded by the Assistant Inspector General of Police , in-charge of  Zone 2, AIG Ahmed Iliyasu, at the canal where the victim’s body was recovered, said, “I killed him because I wanted to take the property worth 900 million naira. Lust for material things made me killed him.

“That Sunday afternoon, when I was sure he was on his way to Artican Resort Hotel, I instructed one of my boys to bring a bag for me. After he signed the documents of the building in question,  in the garden, I told him to  come inside the hotel room so as to give him the money. But when he came I started shouting on him to hand the documents over to me but he insisted I must first pay. At that point, one of my colleagues brought the bag and as Chief  bent down to check the money inside,  I hit  an axe on his head. We dragged him to the toilet , injected him  and he slept off. I wanted to use the document to claim the property as mine and later  sell it”, he said.

Narrating his they were arrested, AIG Iliyasu, said, ” Bob Daniel Ibeaji who claimed to be a Medical Doctor with the following qualifications and certificates: MBBS, Fellow Royal College of Surgery and member Royal College of Surgeon  , all in Edinburgh, in the United Kingdom, as wells s an MBA in Zurich, is the kingpin of the syndicate.

” Investigation revealed that he and been living ill-gotten money through through this means for some time now. Two incidents that  have been established against himself were that of a civil commissioner in Bayelsa State, one Honourable Depologa was murdered and his remains were  found along Abuja Expressway. This happened a week after his encounter with with the victim at Ibeto Hotel, Abuja, which during their discussion offered to give the victim N220 million for a block of flat situated at Durumi , Abuja. The victim’s wife had to flee to Nigeria, vowing never to come back.

“The second victim was one Jude Efule, a Property Developer in Abuja . Efulue also swam into Bob’s net and eld him captive in an apartment and forced him to sign a prepared document transferring ownership of the victim’s property to him. He also discovered that the victim had N9 million in his account. His plan was to kill Jude after sweeping his account. But with the help of neighbours who called the police , Bob and his boys were apprehended and charged to court accordingly.

” It was Bob who canvassed the late Ignatius with a business idea yo the tune of N900 million, following they fixed an appointment at Artican Beach Resort in Ajah.

“Investigation revealed that as Ignatius was about to open the bag they gave him, to ascertain what was inside, Bob, grabbed him from behind she one of the boys hit the victim with an axe on the back head. There and then, they dragged him to the toilet, strangled him and with the assistance of the boys who held the victim down , Bib injected him twice with the lethal I section. Convinced that the dead had been done, Bob gave gave directives to the boys to evacuate the corpse”.