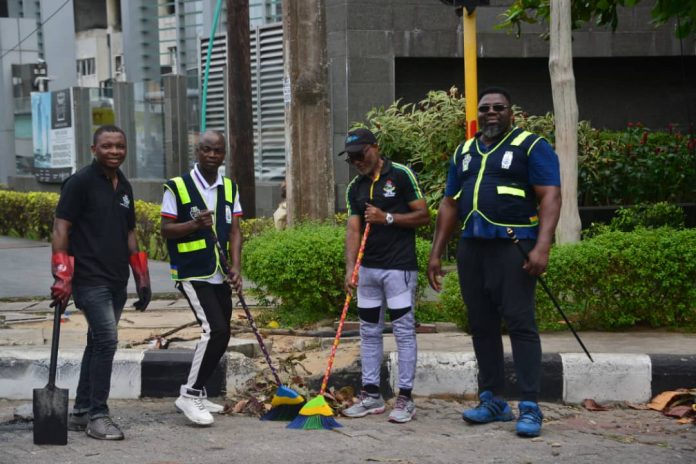 . Urge banks to provide loans for youths with bright ideas

In a bid to reclaim the city and make it clean again, the Police Community Relations Committee (PCRC) has commenced cleaning of streets and clearing of blockades on the roads. 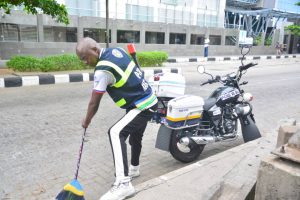 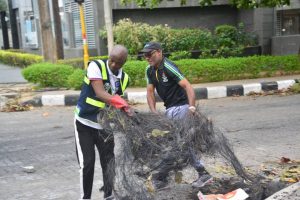 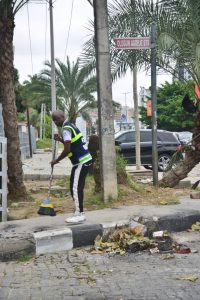 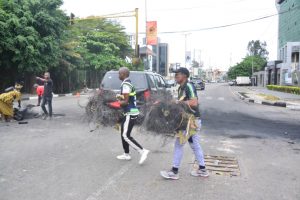 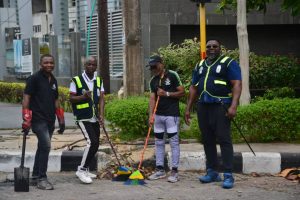 They have also called on Nigeria banks to assist the Federal Government in curbing unemployment and youths restiveness by giving loans to young people.

He said government couldn’t solve all the problems; therefore, banks should intervene and empower young people with bright ideas with loans.

Chairman of PCRC Victoria Island, Mathew Ibadin led his members this morning for the exercise aimed at restoring hope and reclaiming the city.

Ashes from burnt Tyres by protesters were cleared from the streets, while stones, broken bottles and wood logs littering the entire Victoria Island axis were cleared as part of their social responsibility initiative.

The group has also acquired a power bike for the monitoring of traffic in Victoria Island area as part of effort to start to support the police.

According to Ibadin, “What happened in the last few weeks should teach every Nigerian, including the banks a lesson. The banks should now begin to provide long-term loans of 10years, 20years to young minds to power their business ideas. Their National ID card is enough guarantee. Banks are just there and not playing their roles the way it is done abroad. Their interest is to make money. They should begin to support youths with good ideas and fund their businesses. They should begin to provide mortgage.

“Government cannot reach everyone directly, but through the banks, all the needs of young people could be met the way it is done overseas.”

It would be recalled that the same PCRC in Victoria Island recently launched its traffic corps marshals during its first symposium.

At the launch then, a university don, Dr. Ona Ekhoma in his speech said residents must trust the police with information about crime and criminals to achieve a crime-free state through community policing.

“Having a PCRC is not community policing, and in order to establish trust and obtain citizens’ cooperation, the police must eschew all trust busters and become a trustworthy agency.”

Chairman of PCRC, Victoria Island, Mr. Mathew Ibadin, said the vision of the group is to serve as a platform to synergise the security activities of various corporate bodies, organizations and individuals towards the creation of unified architecture for Victoria Island.

“Today, we have launched the traffic corps who are going to be on our payroll because we want to make sure our environment is safe and crime-free,” he said.

While representing the Assistant Inspector General of Police, Zone 2, AIG Ahmed Illiyasu, ACP Bose Akinyemi, said citizens should support the police on community policing while also calling on the officers to befriend the people in the community so as to get useful information to tackle crime.