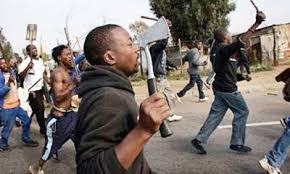 Three suspected members of the terror One Million Boys gang were allegedly lynched by angry mob yesterday, in the Igando area of Lagos.

Their bodies were dumped in a canal by the link bridge between Igando and Abaranje.

Residents alleged that the armed group wrote to inform them of their unprecedented visit, warning them in their own interest to keep cash and substantial valuables for them.

Upon receipt of the letter, residents, formed vigilante groups, taking turn to watch over the community.

By Monday night, they said news went viral that the terror gang was around, causing them to storm out of their respective apartments. By 5.am yesterday, there was reportedly an uproar at Sadiku Olowora street, following report of the invasion.

When The Guardian visited the community by 12.noon, three bodies were afloat the canal.

A resident revealed: “they were arrested by operatives of Oodua Peoples Congress (OPC) who are members of a  vigilante group in the area.

“During interrogation, they said that the lighter with them was meant to lit fire on window nets, in order to gain access into apartments. They were allegedly beaten to a state of coma and died in the process”.

Another resident, Kelechi Nwamobi, said, “one of the suspects said they didn’t mean to kill anyone. In his dying state, he begged everyone he had stolen from since the lockdown started to forgive him, that he was forced to burgle home because of hunger”.

Policemen attached to Ikotun division have arrested seven members of a vigilante group in connection with the killing.