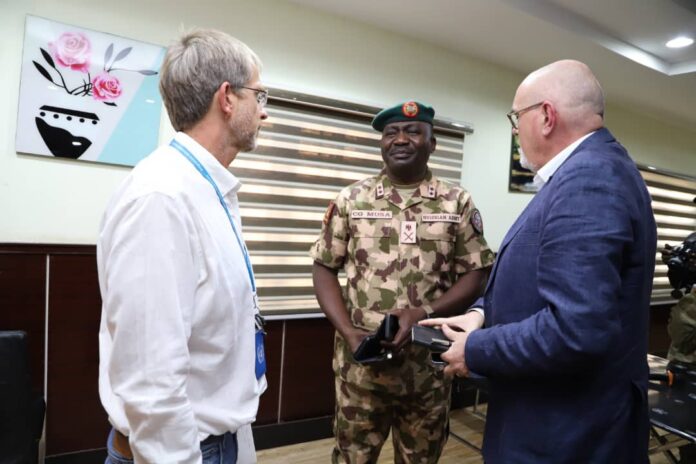 The Theatre Commander, Maj General CG Musa on behalf of the officers and men of Joint Task Force (NE) Operation HADIN KAI, has expressed sincere condolences to the representatives of the Non-Governmental Organizations in the North East (NE) Mr Trond Jenson Head of Office OCHA- Nigeria and his team over the loss of one of their staff who was shot by a soldier and for the injury sustained by the co-pilot.

Maj Gen CG Musa also relayed condolence messages from the Chief of Defence Staff and the Service Chiefs after which a minute silence was observed in honour of the deceased. The TC assured the officials that the MP has commenced investigation to unravel the circumstances with the promise that they would be carried along throughout the process. He then requested they extend the condolence message to the family of the deceased.

The team appreciated the prompt response by the troops on ground for their prompt response and for the immediate medical attention offered to the co-pilot including the recovery of the corpses to Maiduguri for further necessary action. Additionally, the team leader thanked the Theatre for reaching out to them as soon as the incident occurred and disclosed that the co-pilot involved in the incident is rapidly responding to treatment at the hospital.

Relatedly, the two parties agreed that the sad incident will not affect the cooperation, support and harmonious relationship existing between them. The meeting was held at the Command Guest House Maiduguri. Event was hitch free.