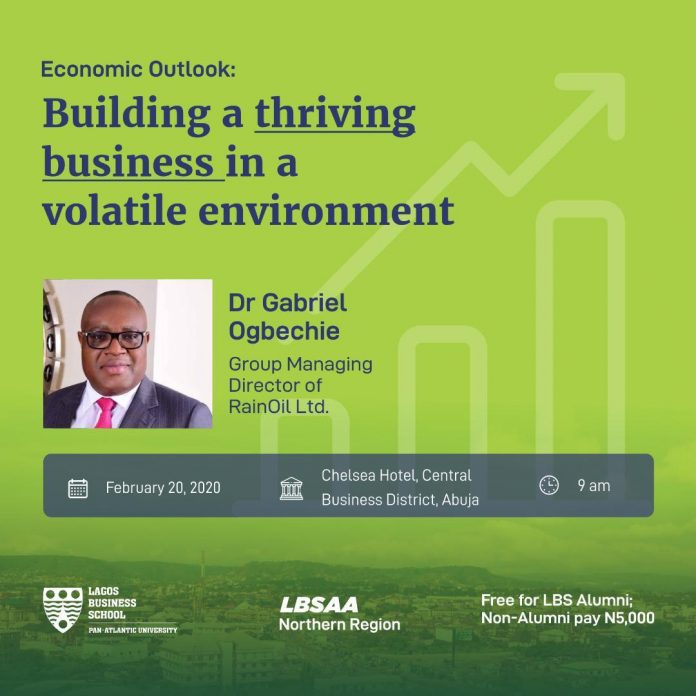 The founder and Group Managing Director of Rainoil Group, Dr. Gabriel Ogbechie would be speaking at the Lagos Business School Alumni symposium billed to hold in Abuja.

Ogbechie who is highly knowledgeable in the oil and gas, shipping and allied sector would be speaking on “Building a thriving business in a volatile environment” at the Chelsea Hotel Abuja on February 20, 2020 by 9.am.

The event, which is free for LBS alumni is open to non-alumni members at the fee of N5,000.

The CEO of Rainoil Ltd., Gabriel Ogbechie, may not ring a bell to many, but he is a known name in the downstream sector of oil and gas and shipping in Nigeria.

Rainoil was established out of the unrest of a young man who said he was tired of receiving the little he was earning and that he could do better for himself and perhaps one day employ others to work for him. Today, rainoil has over 20 branches in the federation.
It has over 70 trucks and a powerful well-equipped oil tank farm tucked away in Delta state that provides oil for its filling station everywhere in Nigeria in record timing.  Rainoil has over 600 staff in their employment and still counting. Recently, it completed and launched its ultra-modern head office in Lagos Island amidst all the celebrities present. In this edition, l present to you a father, brother, husband and MD of Rain Oil.

Gabriel Ogbechie is a native  of Idumuje Ugboko in Aniocha North Local Government Area of Delta state.  He is from an average home and the fifth of six children. His father was a policeman, so it was only natural that he grew up in  the barracks. Being a police child made moving from one place to another the easiest thing he encountered as a young boy.
He recalls that he attended five different primary schools in five years across three different states in the country because “my father was always on transfer and we had to be on the move.” So as to ensure that their educational flow was not disrupted, his father always put them in boarding schools.

He grew up in a modest home, but had a solid background because it was compulsory to be in school and to graduate. Today all his siblings were able to acquire their Bachelors degree due to their father’s principles. He grew up with more female siblings than males –  four sisters and a younger brother.
Young Gabriel has a wonderful close-knit family whose bond is above average. He remembers that his elder sister was always there for him to the extent of acting like a mother as well as a sister. He explained that his way was paid through the university with the help of his elder sister. Gabriel Ogbechie got admission into the University of Benin at the age of 16 and studied production engineering even though he didn’t work one day as an engineer.

He was only 21 years old when he graduated with a second class upper grade. Upon completion of his National Youth Service, he got a job at age 23 and worked in an accounting firm and later moved to an oil company and by the age of 27 he was already married while still developing himself before launching his own brand, Rainoil, at the age of 30 after quitting his lucrative job. One thing has helped Gabriel tremendously, and that is his mathematical skills.

Quitting a well-paying job as a Sales Operations Manager in an established company with a furnished flat and a car to go with it sounded like madness to his peers then. Besides, stooping down to grow a new brand from the scratch isn’t a day’s job, especially for a young man who was newly married and whose wife was expectant.

But young Gabriel was determined. He knew if he works for himself, he could earn bigger and live better.  He started with the little capital he had saved. He remembered that the capital needed then was only N80,000 but it wasn’t easy to get. But he eventually got it and was able to rent  his first truck and began to do what he knew how to do best, drawing on the experience and skills he had garnered working for others people.
It was a case of little drop of water making a mighty ocean. “I was doing what I knew how to do daily, l was improving myself each time a mistake arises. I was saving to buy trucks and more trucks until I knew we are actually going there, even though we are not yet there.”

Accolades
Rainoil has more than 20 filling stations in Nigeria. It has a very large oil tank farm in Oghara in Delta state where its products are stored. The company owns about 75 trucks which takes their products all around the country to their various filling stations and destinations. They have over 600 staff members in th

Gabriel Ogbechie through his foundation scheme has sent several students to school, especially those from his area in Delta state. But according to him, his aspiration is to extend this assistance to children outside his state.