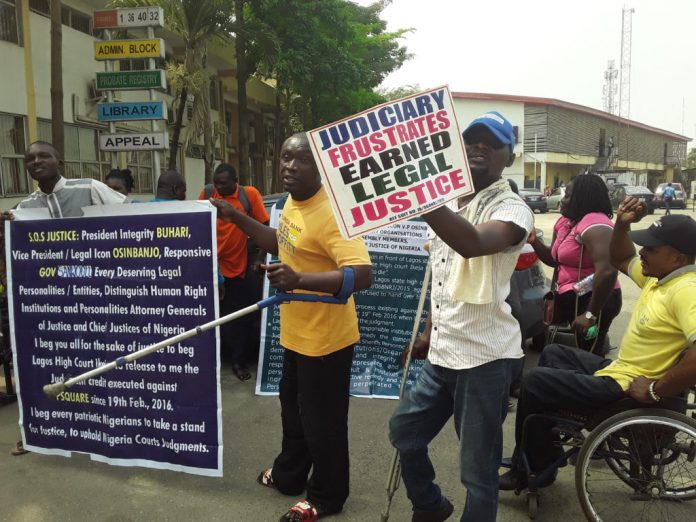 Some persons living with disabilities under the aegis of Foundation Against Abuse of Physically Challenged in Nigeria on Wednesday disrupted both pedestrian and vehicular movements in front of the Lagos State High Court premises along Oba Akinjobi Way in Ikeja.

The visibly angry persons staged a protest within and outside the court premises to demand payment of about N9million  allegedly said to be the judgement sum that Patrick Arueze secured against the now splitted musical group, Psquare.

The spokesperson of the group said that he had secured judgement on January 19, 2016 in a matter presided over by the then judge, Justice Kazeem Alogba who is presently the State Chief Judge and that the money was deposited into the coffers of the Lagos State Judiciary.

Arueze said he organised a show in Benin city, Edo State featuring Psquare, but the musicians failed to show up, forcing fans to go on rampage breaking everything within reach.

He however claimed that since the judgement was pronounced and the money paid, the judiciary had refused to give him the money.

The protest started in front of the office of the Chief Judge as at past 11 in the morning but the protesters were reportedly chased away from the court premises.

This led to the blocking of the Oba Akinjobi Way by the protesters.

In protest they chanted songs, sat on the tarred road waiting for the Chief Judge to address them.

The protest led to heavy vehicular traffic in the Ikeja GRA.

They only allowed the movement of a prison van and convoy of vehicles conveying a body for burial, after which they blocked the main road again.

As at the time of filing this report, there has been no official response from the court.

Nomalcy has however returned to the Ikeja axis following the intervention of police personnel from the State Police Command.