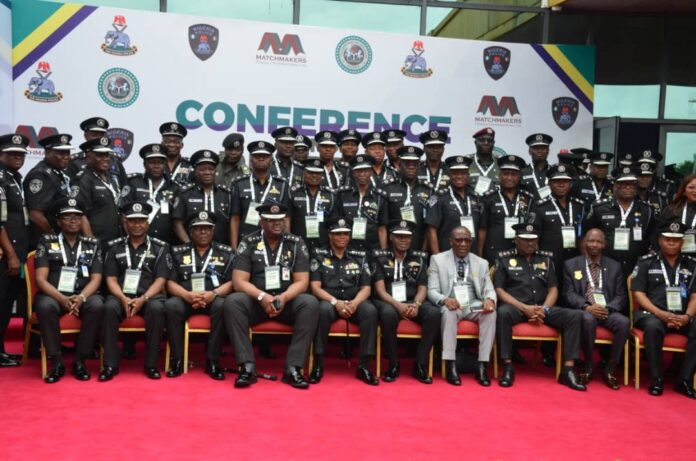 Top police management and Commissioners of Police across the country have all agreed to the Independent National Electoral Commission (INEC) and critical security stakeholders to ensure peaceful, free, fair, transparent and credible elections in 2023.

The agreement was reached at the end of the 3-day Conference and Retreat for Senior Police Officers tagged: ‘The Imperative of Nigeria Police Strategic Plan for Peaceful Elections’, held in Owerri, Imo State Capital and organised by Matchmakers International, a foremost security consultancy company.

A total of 162 senior police officers comprising officers of the rank of Commissioner of Police and above in the Nigeria Police Force from the Force Headquarters, Police Formations, Training Institutions, Zonal Commands and State Commands across the 36 States of the Federation and the FCT attended the event.

The Retreat, which was organized to critically and professionally review the pattern and trend of crimes and undertake a detailed security risk assessment with a view to identifying specific trends that could threaten the security and peaceful conduct before, during and after the General Elections,   was also meant to generate ideas and share experiences towards developing Election Security Strategy and Action Plans and stabilizing the security and political landscape in a manner that will strengthen citizens’ confidence in the electoral process and produce a credible electoral.

At the end of the event, it was generally agreed by all top operatives who attended the event that: “politicians and political parties have critical roles to play in institutionalization of democratic culture and governance and appealed to them to reorder their conduct and activities to enhance free, fair, transparent and credible elections. The Conference & Retreat further stressed that politicians should avoid engaging thugs and non-state actors during elections but to concentrate on policing their communities.

“election operationalizes the constitutional guarantee that sovereignty belongs to the people from whom government derives its power and therefore appealed to the citizens to eschew any behaviour that undermines peaceful, free, fair and credible elections in the country.

“The primacy of the Nigeria Police Force as the lead Agency in securing the Nation’s Electoral Process and, of course, the entire internal security was recognized and re-affirmed by the Conference & Retreat, without undermining the critical support expected from other security Agencies in Nigeria.”

The top police participants therefore  avowed that the Chairman of INEC needs to work concertedly with the Inspector General of Police in ensuring that democratic governance is maintained and delivered to the Nigerian populace.

The Federal Government was also encouraged by the operatives, some of whom have spent over 3 decades in police job to continue to support and equip the Nigeria Police Force towards enhanced operational capability for effective performance as well as ensure operational logistics are planned and provided concurrently for the Nigeria Police Force, given its critical roles in electioneering process.

It was also recommended that the high command should step up its efforts towards preventing and controlling threats to free, fair and credible elections using the continuous intelligence products from the Force Intelligence Bureau and other members of the Intelligence Community.

The retreat also urged    police operational units to ensure the use of early warning indicators as a means of ensuring effective election security management before, during and after the General Elections.

Police operatives were also urged to expand its use of enhanced technology tools, some of which are available at the INTERPOL NCB Abuja and other Federal Government databank Institutions, in aid of its operations across the country and in the cyber space.

As the lead election management security Agency, the Police was also urged to exercise effective partnership and coordination with other security agencies that are deployed to assist the electoral processes as well as ensure that political campaigns by various political parties are streamlined in order to avoid clashes and likely breakdown of law and order.

Police strategic managers were also urged to liaise with political parties and candidates towards ensuring that they commit themselves to peaceful, free, fair, transparent and credible electioneering process.