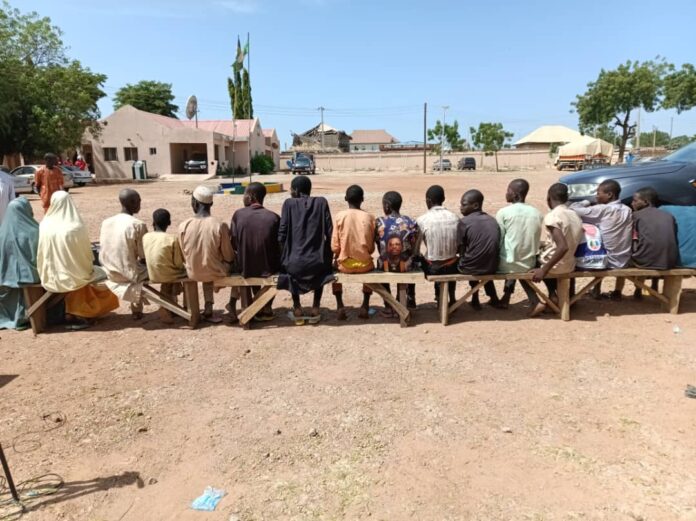 In continuation of its effort to restore lasting peace and security in Zamfara State, the Police Command has again recorded another landmark achievement, rescueing 27 victims who were abducted by a group in Akawa, Gwashi, Tungar Rogo and Anka Villages and taken to bandits camps at Gando/Bagega and Sunke forests in Bukkuyum and Anka LGA respectively.

Spokesman of the command, Mohammed Shehu said the rescue was sequel to report received by the Command that, group of  terrorists invaded the villages and abducted unspecified number of people and took them to Gando/Bagega/ Sunke forests where they spent a week in captivity.

“On receiving the report, the Commissioner of Police deployed additional  Police Tactical operatives to reinforce DPOs  Anka/Bukkuyum and vigilante in their rescue operation to rescue the abducted victims. “Luckily enough, a well coordinated search and rescue operation was carried out with the full support and partnership of the two LGAs Sole Administrators of Anka and Bukkuyum . The outcome of the rescue operation was the unconditional rescue of Twenty 27 kidnapped victims.

“At the moment, 17 out of 27 were brought to the Police Command Headquarters, while the ten other victims are in the hospital receiving medical attention following the trauma they passed through while in captivity.

“All the victims have been debriefed by the Police detectives and the Commissioner of Police, Kolo Yusuf would formally hand over the victims to Commissioner for Security and Home Affairs who will on behalf of His Excellency reunite them with their families.

“The Commissioner of Police Commended the high level commitment to Security of His Excellency Dr. Mohammed Bello Matawalle MON, for his support and encouragement to the Police and other security Agencies in their effort to rid the state of criminal activities. The CP further congratulated the victims for regaining their freedom, and assured the public that, Police will not leave any stone unturned in ensuring that criminal elements are apprehended and made to face the full wrath of the law.”