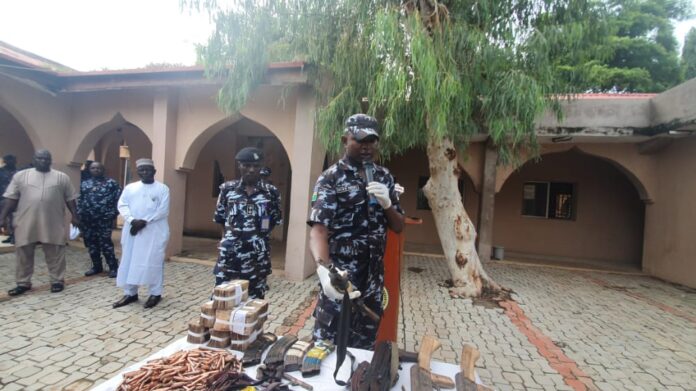 The command’s spokesman, Mohammed Shehu who made the disclosure noted that the tactical squad, while on Anti-Banditry patrol acted on intelligence about an attempt by a notorious bandit’s group led by its leader, Alhaji Bello to invade and attack some communities in Anka and Bukkuyum LGAs respectively.

“One of the most wanted bandits in the Camp called Isiyaku Babangida of Kabe Village of Kebbi State was arrested, while the above mentioned exhibits were recovered at the scene. In the course of interrogation, the suspect explained how he and his other group members that bear Ak-47 rifles invaded several villages in Anka, Bukkuyum, Gummi, rustled unspecified number of cattle and kidnapped many innocent people and kept them in captivity until their relations paid ransom.” Shehu said.

Relatedly, Shehu noted: “On August 23, 2022 at about 5.p.m, a complainant one Nura Umar Shinkafi attached to Zamfara State Investment Office Gusau, reported to the Police that, on same date at around 4.30p.m, unknown persons broke the left side glass of his Peugeot 406 vehicle with registration number Abuja RSH 531 RD and made away with his bag containing his HP Laptop Black in colour with serial number CND0515RPN, valued two hundred fifty thousand naira (N250, 000), one Zamfara State Investment I.D Card and the sum of three million four hundred and seventy three thousand naira (N3,473,000).

“On September 5, 2022, the Police detectives acted on intelligence from the Situation Control Room in the Government House, Gusau and arrested the above named suspect.

“In the course of investigation, the suspect confessed that, they have a syndicate that specialises in monitoring customers who withdraw money in cash from banks or any financial transaction centres and then follow them until the money was snatched at all cost.

“The suspect further stated that he and his syndicate members have on several occasion perpetrated similar crime in Borno, Bauchi, Kebbi and Sokoto States. His confession led to the recovery of the above-mentioned exhibit. Effort is ongoing to arrest the fleeing suspect. Case will be charged to Court as soon as the investigation is completed.

“The Commissioner of Police, CP Kolo Yusuf, tasks members of the Public especially who make financial transaction in bank or any financial centres to be conscious of this syndicate and ensure they report any suspicious persons to the police for appropriate action.”