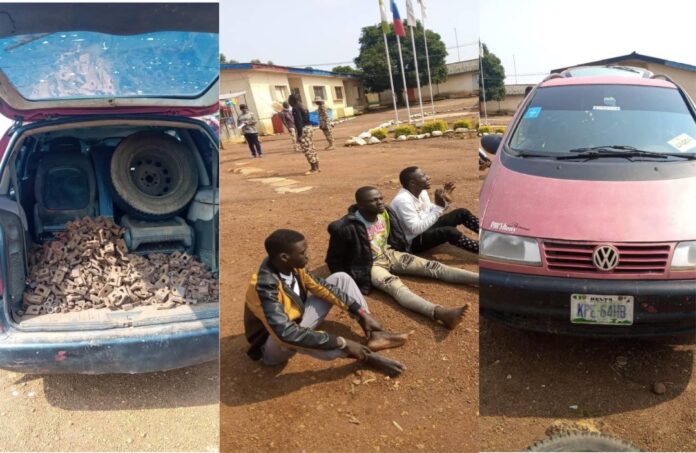 The Railway Police Command of the Nigerian Police Force has beefed up security around the railway corridors in effort to reduce theft of railway infrastructure nationwide.

The Command in the month of July and August, arrested no fewer than 15 suspects for crimes bordering around theft, vandalization, and other heinous crimes committed around the Nigerian Railway Corporation infrastructure.

According to Railway Police Command boss, CP Yetunde Longe, in Minna, Niger State, three suspects were intercepted by the patrol team of the Railway Police Division upon credible tip-off by members of a vigilante group. The suspects, Hadi Mohammed, 42, Abdullahi Mohammed, 34, and Abdullahi Shittu, 45, were arrested with 32 Railway iron slippers loaded in a saloon car.

“Similarly in Aba, four suspects, Michael Chukwuebuka, Chigozie Augustine, Onyekachi Abba, and Chukwuma Adumoha, were arrested in connection to the theft of railway pandrol slippers kept by Chinese Construction Company (CCECC) for construction work. Upon investigation, the stolen items were recovered and handed over to the construction company.

“Two fleeing suspects, Ridwan Olalekan and Sharafa Muritala, have also been arrested and charged to court by the Railway Criminal Investigation Department. The suspects were initially spotted in a bush in Akwanga, Nasarawa State, where they vandalized about 72 rail track irons. At the sight of the policemen, they suspect fled the scene and abandoned their truck vehicle. After intense investigation, the suspects were arrested and charged to court. Both have remanded in Ikoyi Correctional Centre.

“While, the Ilorin division of the Command, Kwara state, also apprehended two suspected vandals- Yahaya Mohammed and Jumai Sule with 113 pandrol clips at Sabongida area of Jebba during a routine patrol; Gombe division also arrested one Bashir Abudullahi who was caught in the act of vandalizing and stealing 58 railway clips.

“Two trucks belonging to Dangote Sugar were spotted in Kaduna, loaded with unspecified amount of Railway irons belonging to the Nigerian Railway Corporation. No suspects have been arrested in connection with the crime, however, the trucks have been moved to safe custody while investigations are ongoing.”

Longe added that the war against railway vandalism is a continuous one until the entire Nigerian rail roads are free from vandals and criminal elements as perpetrators would be made to face the full wrath of the law.