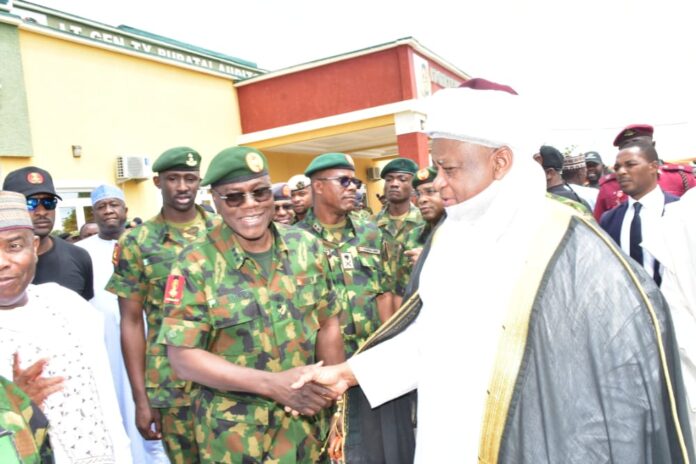 The Chief of Army Staff (COAS) Lt. General Faruk Yahaya has said that the Nigerian Army under his watch would continue to prioritise training of troops in order to attain professional competence required to decisively deal with security challenges in the country. The COAS made the remark today, while declaring open, the Second Commanding Officers’ Workshop 2022 at the Headquarters 8 Division Nigerian Army, Giginya Barracks, Sokoto.

Speaking further, the COAS noted that the workshop themed, “Equipment Maintenance and Operational Efficiency: The Role of Operational and Tactical Level Commanders in the Nigerian Army as well as Sister Services through Inter Agency Cooperation” is apt and in consonance with his vision for the Nigerian Army. General Yahaya expressed optimism that the workshop would shape the operational focus and approaches of Commanding Officers and Junior Commanders toward operating effectively and efficiently in a joint environment. The COAS appreciated the Commander-in-Chief of the Armed Forces, President Muhammadu Buhari for his tireless support to the Nigerian Army.

In his goodwill message, the Governor of Sokoto State, Rt Hon Aminu Waziri Tambuwal lauded the contributions of the Nigerian Army to the maintenance of peace and security in the state and the nation at large. He added that synergy with other services and security agencies has further enhanced the fight against insecurity in the north west.

In the same vein, the Sultan of Sokoto Alhaji Saad Abubakar III commended troops of the Nigerian Army under the watch of Yahaya for their effort and sacrifices in maintaining security in the country.The Royal father prayed for peace in the nation.

In his welcome address, the General Officer Commanding 8 Division Nigerian Army/Commander Operation HADARIN DAJI, Maj General Uwem Bassey appreciated the COAS for approving 8 Division to host the Workshop and for providing the logistics support for the training. He assured the COAS of the continued commitment of officers and soldiers of 8 Division to ongoing operations to turn the tide against the nation’s adversaries.