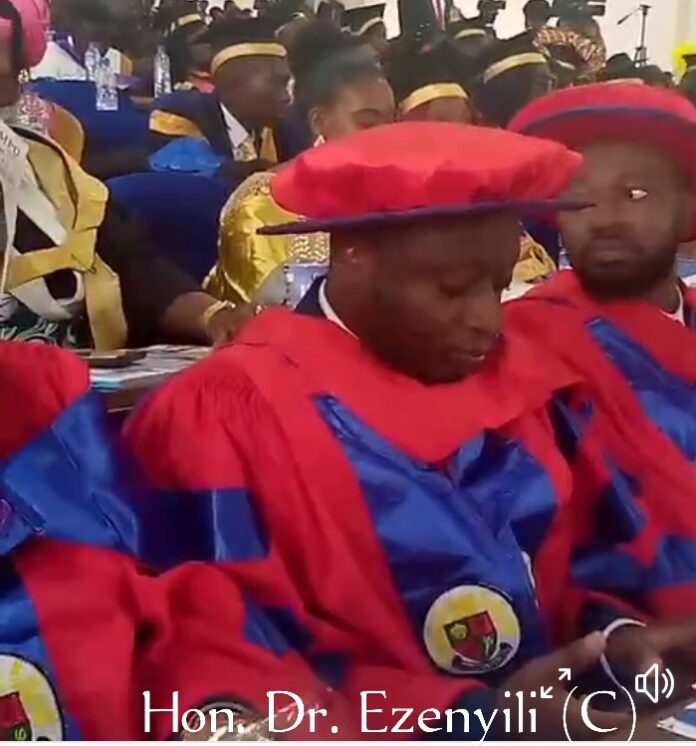 The award presentation was performed by the Vice Chancellor of the University, Professor Lawrence Ikechukwu Ezemonye at the 20th Convocation ceremony of the institution.

Hon. Ezenyili appreciated the university for the honour done on him.

Also honoured by the Institution was the President of Christ Embassy, Pastor Chris Oyakhilome who bagged Honorary Doctor of Science.

Obi Kelvin Ezenyili is a former research student at the University of Manchester, Faculty of Humanities, School of Social Sciences, Department of Governance and Public Policy and hails from Oko – Amakom, in Oshimili South Local Government Area of Delta – State, Nigeria.

His personality was significantly shaped during his years at the university where he developed analytical, communicative and organisational skills.

His academic background and interest are focused on eradicating corruption, with the aim to insatiate good governance strategies in practice in the Nigerian system, with a general foundation in the nature of public policy, the public workplace, its political and legal environment, and how to propound governance policies, and development strategies for developing Countries.

As an Undergraduate at Igbinedion University Okada, Nigeria, his research was focused on “Democracy and Fiscal Federalism”, case study: Niger-Delta, Nigeria. His First Masters level (University of York, Uk), research was directed towards, “Democracy and Good Governance in Nigeria: A Decade of Democratic Accountability (or Lack Thereof).

He was elected as Chairman in March 2021 after winning at the General Election and he is currently the Executive Chairman of Oshimili South Local Government Area.