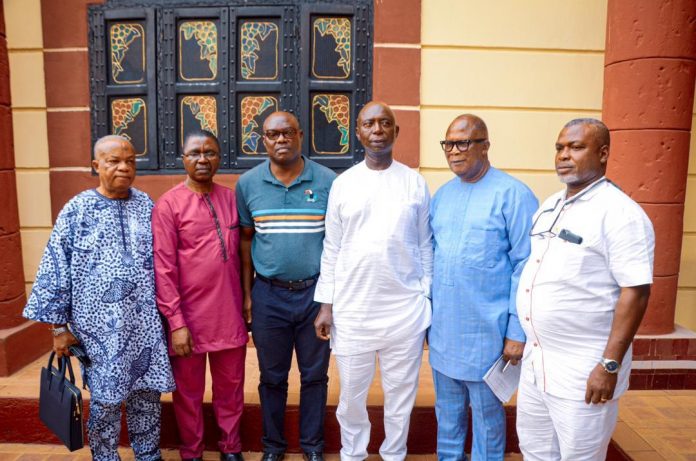 Delta State born billionaire, Prince Ned Nwoko who just landed in the State on Saturday 25th January, 2020 as his first since returning from Antarctica, has assembled a 5-man committee made up of professors from different universities to produce a template on malaria vaccine research in Africa.

Nwoko while addressing journalists immediately after a closed door meeting with the University dons, said his foundation was fully prepared to commence the malaria vaccine research while efforts were on to get the approval of the government to fumigate Nigeria.

He stated that his foundation has the capacity to fund the project. Nwoko however said, because of the scope, he would need the support of African governments, Nigeria, corporate entities and individuals to drive the project to success.

The international lawyer affirmed that he had received support from South Africa, Burkina-Faso and Ghana and called on other African countries to key into the project.

The adventurous Nwoko, morever, gave a background of his visit to Antarctica where he met with researchers and brainstormed with them on his vision to have malaria eradicated from Africa.

“I went to Antarctica for the sake of humanity. You must understand that malaria is Africa’s problem and not for the whites.

“The big name Western countries don’t have malaria, but they fund researchers to come up with vaccines for human diseases.

” Antarctica is not inhabited by anybody. What you have are research organizations mostly from America and about 11 other countries. They go there because of its cool and hyegenic natural endowment to carry out their researches, which most often they break through with curative vaccines for various human ailments. There is no Nigerian there, so I went there to share idea on how best we can produce a vaccine that can permanently eradicate malaria from Africa”, Nwoko explained.

Speaking further, he said the preliminary stage of the programme would be to fumigate Nigeria, which he said the foundation is working on the approval of the date with the Federal, States and Local Governments of Nigeria He stated that the second stage would be to commission researchers who would embark on the research and production of the malaria vaccine.

He therefore called on every Nigerian to get prepared to embark on massive clean up of the country that will follow with thorough fumigation.

Also speaking with the newsmen, the Head of the Ned Nwoko Malaria Eradication Project Implementation Committee, Prof. Nduka Uraih, commended the Anioma Star Prince for the opportunity to serve in the internationally acclaimed humanitarian health service initiative. Prof Uraih said that the Implementation team would develop a feasible blueprint for the total annihilation of malaria in Africa.

The Professor of Toxicology and former Vice Chancellor of the Gabriel Igbinedion University, Edo State, maintained that the team he had been appointed to head for the malaria vaccine project implementation would deliver on mandate.