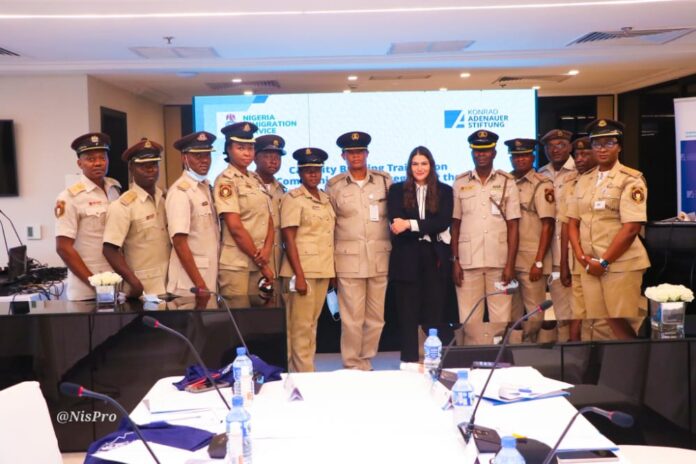 The Comptroller General of Immigration Isah Jere Idris has commended Konrad Adenauer Stiftung for its development activities in the country.

The Comptroller General gave the commendation yesterday in Abuja at the opening ceremony of the capacity building workshop organized for Public Relations Officers of the Service drawn from Commands and Formations across the country.

Represented by the Assistant Comptroller General in charge of Regular Migration, ACG Usman Abdullahi mni, the Comptroller General thanked the Country Representative of Konrad Adenauer Stiftung and her team for the excellent organization of the workshop and called for closer collaboration for enhanced relationship. He affirmed management’s commitment to deepen capacity building activities for Public Relations Officers of the Service with a view to equipping them with modern skills and competences to enable them communicate the ills of irregular migration to the public more effectively.

He noted that the Service has concluded plans to kick off nationwide sensitization activities on the dangers of irregular migration by next week assuring that more efforts are being made including the deployment of eBorder assets aimed at ensuring enhanced Border security as well as humane, orderly and safe migration across the nation’s Border Crossing Points.

The workshop which held between September 19 to 20, 2022 was attended by 45 Public Relations Officers drawn from Commands and Formations across the country.

Eminent resource persons such as Prof. Jake Dan-Azumi, Dr. Tony Luka Elumelu of the ECOWAS Commission, Dr. Peter Afunanya and Mr. Arinze Mbanefo from NAPTIP among others made insightful presentations during the event.

It would be recalled that a similar capacity building workshop was organized for Public Relations Officers of the Service sometimes last year as part of deliberate resolve by management to develop and strengthen its communication activities for improved public engagement.

A major highlight of the workshop was the presentation and adoption of a communique which called for enhanced deployment of effective communication interventions in addressing some dangers associated with emerging migratory realities as well as the need to scale up training and retraining efforts for Public Relations Officers of the Service for enhanced performance.