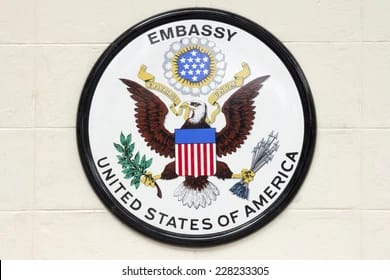 The United States of America (US) government has clarified that it has no prefered candidate ahead of Nigeria’s presidential election slated for February 25, 2023.

US Consul-General in Nigeria, Mr. Will Stevens made this known on Friday in Asaba at a town hall meeting organised by the Niger Delta Open Observatory (NOGO) cluster with support from the USAID Strengthening Civic Advocacy and Local Engagement (SCALE).

Our correspondents reports that town hall meeting is for the signing of accord for Open Government Partnership by guber candidates in Delta with implementation by a Non-governmental organisation, PolicyAlert.

Stevens disclosed that the government and people of the United States are not intrested in any candidate or political party in Nigeria, but are keen to see democracy strive in the country.

“As everyone knows, democracy is a long and evolving process, we have been working with Nigerian Government as partners to support INEC and civil societies.

“We in the US do not have a preferred candidate. We are not interested in any political party or candidate.

“What we are interested is a free, fair and credible election that would be a representation of the yearnings of the people of Nigeria.

“We want to see a democratic Nigeria. We are interested in forums like this town hall meeting that allow people hold candidates accountable and hear them engage on issues of governance”, Stevens said.

He said that the US government has provided nearly $50 million worth of technical assistance to INEC and other stakeholders in the electoral process to strengthen mechanisms for a credible polls.

The Consul-General disclosed that the US government want an electoral system that would allow Nigerians feel comfortable such that when they vote, their votes will be counted.

He said his visit to Delta and other states in the South-Eastern region of Nigeria was to do pre-election monitoring, to look and see how things are developing across the nation.

Stevens said: “These coming elections in Nigeria are so important because Nigeria is the fifth largest democracy in the world.

“So it is our belief that when the people of Nigeria come out to vote, they are showing the strength of their democracy to the rest of the world.

“We are really excited about the upcoming elections, we are doing everything we can to make sure we understand what is happening and articulate to the people of US and the rest of the world.”

He said the US government is really pleased with developments in the nation’s polity like the electoral reform act, which he noted should put in place good measures to strengthen voting security.

The Consul-General said the US government, would discourage any of the politicians, citizens or other parties who encourage violence or seeking to undermine the democratic process.

“One thing we have done in the past and will continue to do is to see that those who seek to undermine the democratic process can and will be found ineligible for visa to the US.

“It is something, a tool we have in place and do around the world, and have done here in Nigeria and will do it again if we see people seeking to undermine the electoral process or encourage violence”, Stevens said.