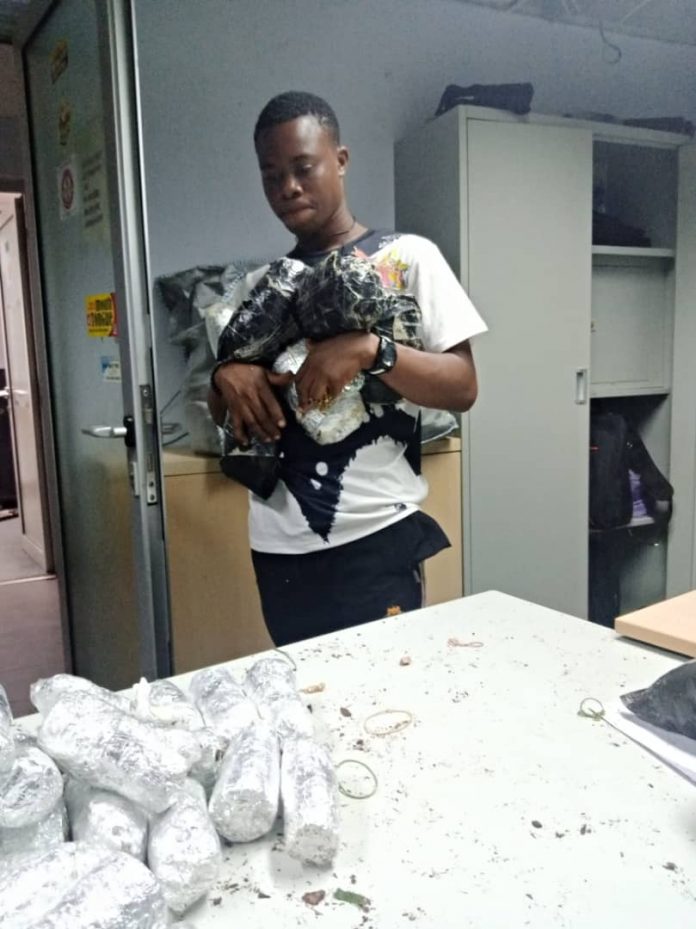 The Head of Public Affairs, NDLEA, Mr. Jonah Achema made the disclosure in a statement made available to newsmen on Tuesday in Abuja.

Achema said that the suspected drug trafficker, Sunday Odi was intercepted at the departure hall of the airport while attempting to board a Turkish airline flight to Northern Cyprus en-route Istanbul, Turkey.

According to him, 23-year old Odi an indigene of Ezza South Local Government Area, Ebonyi State was offered admission to read Tourism and Hotel Management at the Near East University, Cyprus.

“During a search of his luggage, some dried weeds which tested positive for Cannabis Sativa weighing 13.55 kg were found concealed in dried hibiscus flowers and stuffed in empty water bottles.

“The drugs were wrapped in little quantities in the bottles which were cut apart for the wraps to enter and sealed back with a brand label ‘Wonder Bitter Root’.

“The bottles were submerged in the bags with food condiments and provisions, ” he said.

Achema, however, said Odi denied knowledge of the content of the bag while disclosing that one Emmanuel Ihebekwe, a Nigerian resident in Cyprus was instrumental to the University admission.

Achema said that Odi claimed that Ihebekwe had told him to come along with some foodstuff and malaria drugs contained in two “Ghana-must-go” bags.