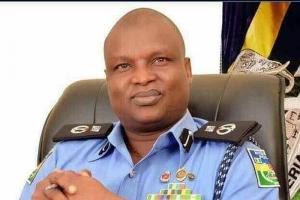 A man , Mr Afeez Mojeed , has alleged that Commander ,Inspector-General of Police Intelligence Response Squad (IRT) ,DCP Abba Kyari ,defrauded him of N41million six years ago while he was serving as the Officer incharge of the Lagos State Police Command Special Anti Robbery Squad (SARS).
Mojeed had alleged that he was arrested six years ago by Kyari and was forced to part with the said money by SARS operatives under the watch of Kyari.
But in a swift reaction , Kyari has denied the allegation, saying that it was a cheap blackmail by Mojeed who he described as a suspected fraudster who is still under investigation.
Kyari who responded through a lawyer, Mr Hamza Nuhu ,on the blackmail attempt,said :” Afeez Mojeed still have a pending case in the Court as he was charged for fraud . He allegedly defrauded the sum N94million from a victim. He was arrested six years ago and 41m was recovered from the proceeds of the crime which he voluntarily paid back the victim(Owner of the money) directly through the victim’s bank account.
“During investigation, Mojeed confessed on video and in writing that he bought a Honda Accord car 2008 model and N7 millon land from the N94 million he allegedly defrauded . He also confessed that that he squandered N31million on hotels and girlfriends. He submitted the car and land documents which was registered as exhibit before he was charged to court and after some years he was discharged, but not acquitted by the court because the complainant was not coming to court as most Nigerians do.
“The land document and the car that were registered as exhibit are still kept with the exhibit keeper in Lagos State Police Command. Mojeed will be re-arrested and charge to court again as he was not acquitted by the court. The good news is that the complainant has assured the police that he is now in Nigeria ready to be attending the court process untill his case is concluded this time around as he has vowed not to leave his balance of N3I to Mojeed.
“We are surprised that Mojeed is mentioning Abba Kyari’s name as if he gave him money for his personal use. He did not give Kyari a dime and it is on record that the respected officer has never collected money from any of his suspects despite the thousands of cases he has handled while as officer incharge of SARS or as IRT Commander.
“Kyari wouldn’t have been who he is today if he is a cheap corrupt officer like the accused is painting him . He has no evidence of giving Kyari a dime . It was a lie told to blackmail Kyari . Also , Mojeed needs to be reminded that giving false information is still an offence in Nigeria constitution and the informant can be charged to Court.
” I sincerely appeal to Lawyers to be mindful of those who they assist in writing false petitions which they always leak to the media .If it is true that Kyari ate his N41million what was he doing throughout the six years and why did he not go to anti graft agencies or the Court for justice. Anyway ,some Human Right Lawyers have declared on their own to sue Mojeed for defamation of character of Kyari on Friday. This will stand as a deterrent to other people who are being used by perceived enemies and unscrupulous people defame people’s characters . It is not easy to build a name”.