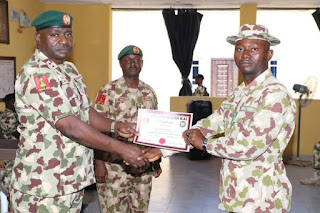 The Theatre Training School (TTS) has on Saturday, August 6, 2022 graduated 78 participants of the In-Theatre Train-the-Trainers’ Course Batch 3/2022, comprising of 5 Officers and 73 Soldiers at the School in Maimalari Military Cantonment, Maiduguri.

He also cautioned them against unprofessional conduct in the discharge of their constitutional duty.

Earlier in his welcome address, the Theatre Training Officer (TTO), Brigadier General EO Oduyebo disclosed that the participants were drawn from various units across the Theatre.

He averred that the two weeks rigorous training is designed to expose participants to human right law, leadership, as well as Military techniques, tactics and procedures that will aid troops effectively neutralize adversaries an bring the war to an end.

There was presentation of certificate of attendance, reward to best graduating student in all aspects of the training, course critic and lesson learnt session as well as group photograph.