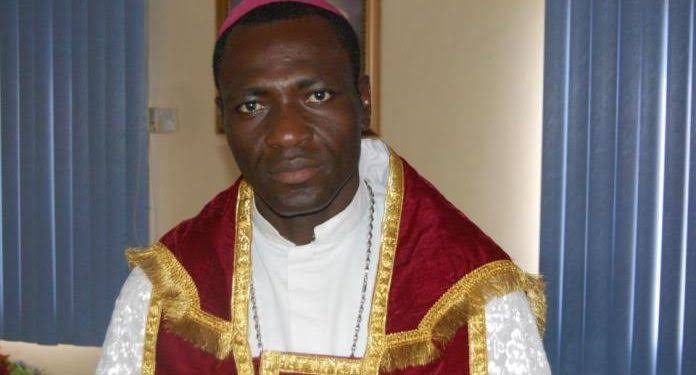 Lagos State Government on Wednesday arraigned the General Overseer of Resurrection Praise Ministries for Africa, Bishop Samson Benjamin, before an Igbosere Magistrates’ Court for violating the presidential lockdown order.
Benjamin alias ‘Jehovah Sharp Sharp’ was arrested on Tuesday in front of the Chinese Embassy in Lagos where he allegedly led a number of people to protest the alleged mistreatment of Nigerians in China.

He was arraigned alongside Jerry Abel and Samson Mustapha on a three-count charge of violating the stay-at-home order and conduct likely to cause breach of peace.
According to the cleric, the Chinese were operating freely in Nigeria even though COVID-19 started in their country but chose to mistreat Nigerians and other blacks resident in China.

Officials of the Chinese Embassy allegedly sent a video clip of the alleged invasion to the police, which prompted the arrest of the defendants by officers of the Victoria Island Division of the Nigeria Police.
The defendants were thereafter taken to the Force Criminal Investigation Department (CID) Panti, Yaba Lagos.

During proceedings on Wednesday, Dr Jide Martins, a Director in the Lagos State Directorate of Public Prosecution, told the court that the defendants had on April 21, led a protest to the Chinese Embassy located at No. 161A, Idejo St., Victoria Island Lagos.
Martins said the defendants’ actions contravened the COVID-19 Regulation and is punishable under Section 5 Quarantine Act and Section 122 of the Criminal Law of Lagos, 2015.
“The defendants conduct was also likely to cause breach of the peace which violates Section 168 of the Criminal Law of Lagos 2015,” he said.
Magistrate Yewande Oshin granted Abel and Mustapha bail in the sum of N500,000 each with two sureties each in like sum, while Benjamin was granted N1 million bail with two sureties in like sum.
Mrs. Oshin ordered that one of the sureties must be a cleric of a church with minimum of three branches.

She adjourned the case until May 5 for mention.