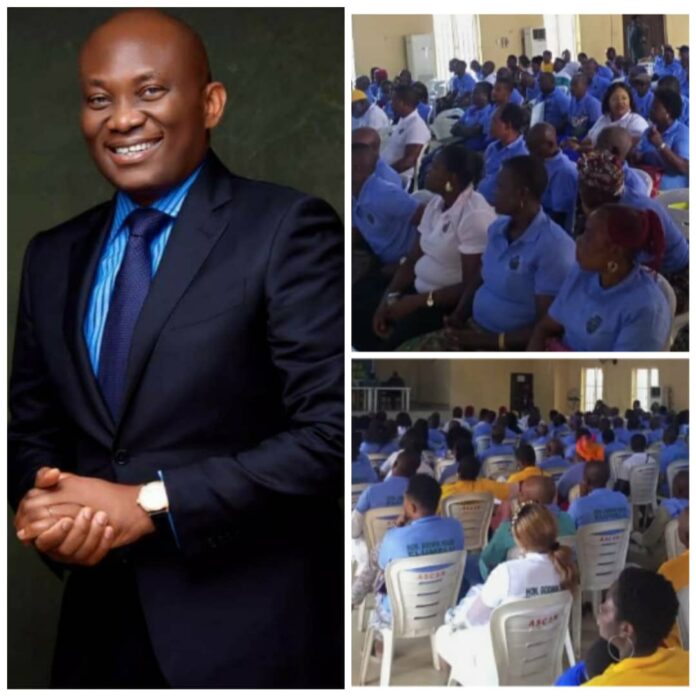 Minority leader in Nigeria’s House of Representative, Rt Hon Ndudi Elumelu has been achieving silently in his bid to reduce the poverty level in his constituency.

Apart from the numerous empowerments to his AniochaOshimili people over the years, Elumelu for the umpteenth time has attracted the training of no fewer than 200 aqua-culturists by the Institute of Oceanography.

This particular training, Razornewsng.com gathered is the third in a series within the last 3 years attracted by Rt. Hon. Elumelu.

The training is the initiative of Nigeria Institute for Oceanography and Marine Research (NIOMR) that is aimed at equipping young people with the requisite skills and funding in aquafarming.

While addressing the beneficiaries, Rt. Hon. Ndudi Elumelu who was represented by His Senior Legislative Aide, Sir Tony Ayaegbunem, said, “the initiative is centered at reducing the over dependent on white collar jobs and we are hoping that the first thing we are able to achieve is the change of mindset.

Appreciating the facilitator, one of the trainees, Mr. Offor showered encomium on the Federal Lawmaker, Rt. Hon. Elumelu for attracting dividends of democracy to his Federal Constituency.

200 Trainees which cuts across the 4 local government areas in Delta north, successfully obtained certification and benefitted the sum of N100,000 each as start-up fund.

Aquaculture or aquafarming is breeding, raising, and harvesting fish, shellfish, and aquatic plants. Basically, it is simply farming in water.