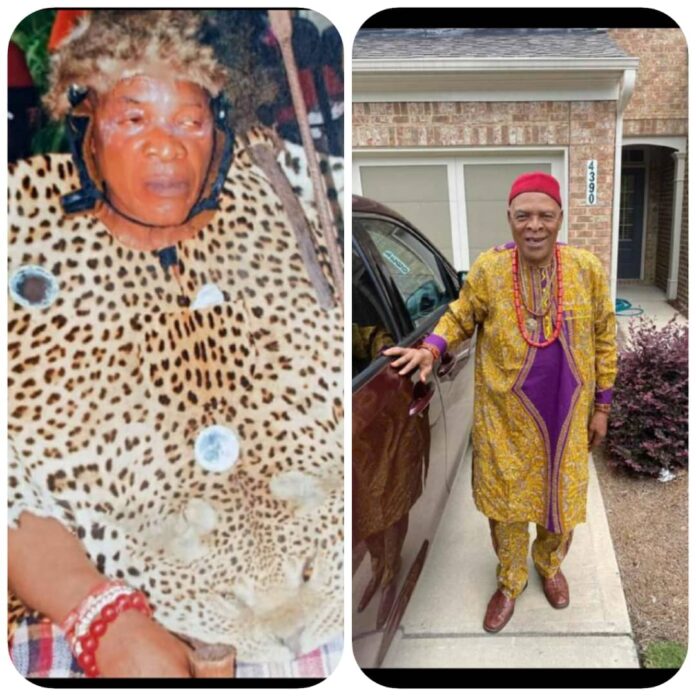 Life is but a brief Candle. The impact we make on humanity is what lives on long after we are gone. We are surrounded by great people in our world from those who have worked assiduously to make this world more habitable and a better place to live in to those who have contributed significantly in their little world.

When such people pass away to the other side as everyone will, eventually, it is usually heart-touching and reminds us subtly of the power of death over all categories of people, small and great, rich or poor. Agrarian community of Onicha-Ugbo, Aniocha North Local Government Area of Delta State is presently mourning one of such rare gems and a highly revered ‘A’ list chiefs, High Chief Cyprian Azubukwu Mosindi; a man many regarded as one of the very few who stood for truth and fair play while alive.

He is one of the top traditional chiefs that makes the town called Onicha-Ugbo thick. His life and times are full of testimonies of good deeds and love for humanity.

Those who were close to him in his lifetime said he is the chief of chiefs in his Umuolo community as he worked very hard to ensure peace and unity amongst his kindred.

So many community dwellers mourned the death of the chief whom they call ‘a good man’.

Evidence abounds that chief was a thorough-bred son of Onicha-Ugbo, whose interest and love for the culture and traditions of the town remained close to his heart before his demise.

History will always remember the Ozah of Umuolo and Onicha Ugbo and Chairman, Ozazuam Group of Companies for his little contribution in transforming the town while alive.

Chief Cyprian Azubukwu Mosindi was born on December 7, 1944 by the Late Ajunwa Mosindi and Ndiali, both indigenes of Onicha Ugbo, Aniocha North Local Government Area, Delta State, Nigeria. He spent his early childhood in Onicha Ugbo, Delta State. Chief C.A Mosindi attended Methodist Boys High School Lagos, where his excellent performance earned him scholarships. He proceeded to attend the University of Lagos, where he obtained a BSc (Hons) degree in Business Administration in 1984, an MSc degree in Business Administration in 1988 and an MSc in Banking and Finance. Through the course of fate and the Almighty God, he recorded several remarkable achievements.

Chief C. A Mosindi qualified as a Stockbroker in 1999. He was a Certified Management Trainer with the Nigeria’s apex Management Training Regulatory Authority, Nigerian Centre for Management Development.
Chief C. A Mosindi served as a Banker at the former Barclays Bank Nigeria Plc now Union Bank of Nigeria Plc from February 22, 1968 to 1978. During this period, he worked as a Trainer at the Bank’s Staff Training Center at Onike, Yaba, Lagos training all grades of the Bank’s staff in banking processes and procedures.

Later in 1978, Chief C.A Mosindi proceeded to Leventis Group of Companies, where he was the Group’s first Capital Market Registrar up to 1995 when he left to set up his own Company, CORPORATE DIAMOND SECURITIES AND INVESTMENTS LIMITED, which was one of the leading Capital Market Registrars Operators in Nigeria. He was the Executive Chairman. As a Capital Market Registrar, he was involved in raising funds for corporate entities, including Banks, whose shares were quoted on the Nigerian Stock Exchange now Nigerian Exchange Limited (NGX).
On the sidelines, he continued to train personnel of Companies, including the Central Bank of Nigeria (CBN) and Nigeria’s Securities and Exchange Commission (SEC) in the areas of share registration and management.
His Role as the OZAH of Umuolo and Onicha-Ugbo
At a relatively young age of 37 years in 1983 he was anointed as the OZAH of his native Community, Umuolo and Onicha Ugbo. He was installed in a very colorful traditional ceremony from 27th August to 2nd September, 1987, when he swore by God Almighty and the Land of his People to do justice to all without fear or favor.
As the Ozah, he took charge of all matters of War and Peace in his Community where his Court sat daily adjudicating on disputes.
Chief C.A Mosindi was passionate about his people and culture.

He was a very cheerful person. He held an optimistic view of life; he was resilient and withstood several of life’s challenges. With a resonating voice and charismatic presence, it was impossible to miss Chief C.A Mosindi in a gathering of many. He was a firm believer of sowing good deeds and thus anchored his actions on this belief. He was the benefactor of several persons within and outside his community.
Chief C.A Mosindi was a loving and devoted Husband and Father. He is survived by 2 Wives, 9 Children and 15 grandchildren.

Although he is gone, his impact on the community lives on.