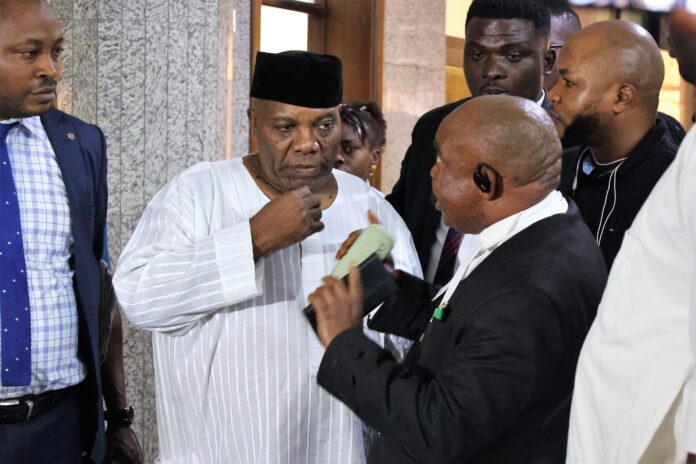 In a well-considered judgment, the trial court held that the Economic and Financial Crimes Commission, EFCC, successfully established its case against Okupe, that evidence before it established that the defendant had in the discharge of his official duties, accepted cash payments that were above the statutory threshold, without recourse to a financial institution.

It was alleged that Okupe received funds from the office of the National Security Adviser, NSA, which he could not account for. He was convicted and sentenced to two years imprisonment on counts 34 to 59. The charges are centred on accusations of receiving various sums ranging from N10million in different occasions from 2012 to 2015 from ONSA when he was senior special assistant on public affairs to former President Goodluck Jonathan. The court however gave the defendant an option of N500, 000 fine on each of the counts.

He was mandated to pay the fine before 4.30 pm or be committed to prison.

The Economic and Financial Crimes Commission EFCC had arraigned Okupe alongside his two companies: Value Trust Investments and Abrahams Telecoms on a 59-count charge bordering on money laundering and criminal diversion of funds to the tune of N702,000,000 (Seven Hundred and Two Million Naira only) .

One of the charges Okupe is facing is: “That you, Dr. Doyin Okupe, being the Senior Special Assistant to President Goodluck Jonathan from July 2012 to May 2015, and being the managing director, chief executive officer, and a signatory to the bank account of Abrahams Telecoms Ltd, on or about the 3rd October, 2014 in Abuja within the jurisdiction of this honourable court, directly took possession or control of the sum of N35 million, transferred to the account of Abrahams Telecoms Ltd from the account of the Office of the National Security Adviser with the Central Bank of Nigeria, purporting to be for special services when you reasonably ought to have known that the said fund formed part of the proceeds of an unlawful activity”.

He had pleaded not guilty to the charges upon arraignment, setting the stage for his full trail. In the course of the trial, the EFCC called several witnesses and tendered documents which were admitted in evidence.

The convict called a number of witnesses in the course of his defence. One of the witnesses who testified as the fourth defence witness was Honourable Bamidele Salami, a member of the House of Representatives, who served as head of media in the office of the then senior special assistant on public affairs to President Jonathan. He had told the court on February 8, 2021 that “there were approximately 30 staff in different units of the office and the office was funded by the Presidency through the Office of the National Security Adviser, ONSA under Col. Sambo Dasuki (retd)”.

He disclosed that funding in the sum of N10 million Naira was provided on a monthly basis in cash to Doyin Okupe through an officer in ONSA.

Bamidele further revealed that N3million was paid for a programme, ‘Insight’ on NTA, to correct the negative perception of the former President.

He said it was untrue that the programme was aired “free of charge” as corporate social responsibility by the NTA.

However, the defence witness’ evidence on the sponsorship of Insight on NTA contradicted the testimony of the first prosecution witness (PW1), Osas Azonabor, an operative of the EFCC, who had told the court “that no receipt was issued for the payment to NTA. However a letter was written to NTA and investigations further revealed that the programme was aired free of charge as directed by the then Director General of NTA who said the programme was to be seen as the Corporate Social Responsibility of the NTA.”