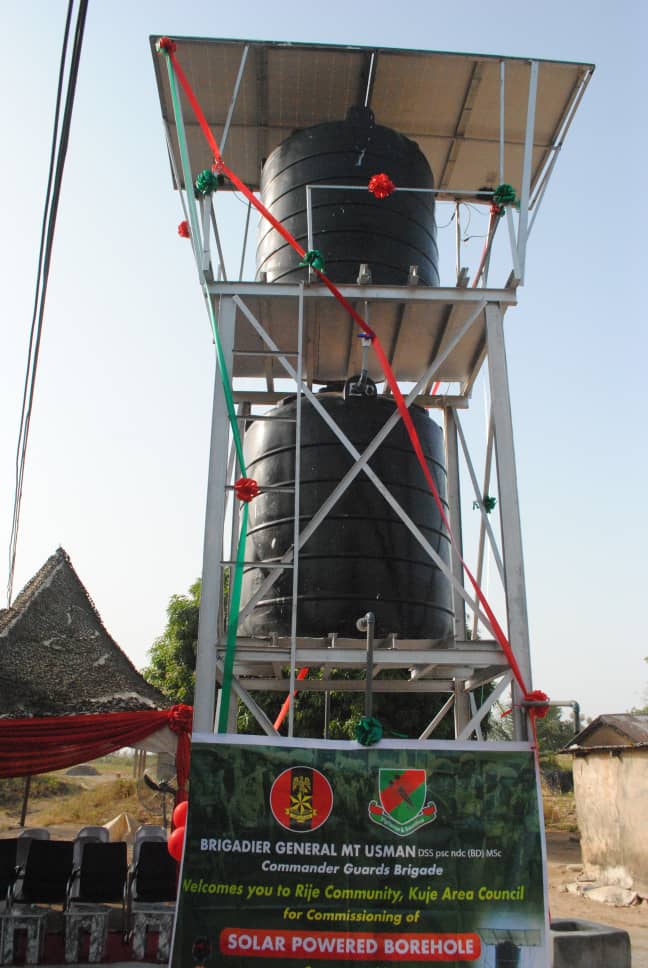 Residents of Rije Community in Kuje Area Council outskirts of the Federal Capital Territory (FCT) on Wednesday rejoiced as the Guards Brigade of the Nigerian Army donated a Solar Powered Borehole to alleviate the perennial water scarcity in the community.

The gesture, which is in line with the Chief of Army Staff’s (COAS)vision and as part of Guards Brigade zeal to continue to win the confidence of the general populace to effectively secure and defend the seat of power and its environs, also featured a Free Medical and Educational rhapsody in Danfara village and Government Secondary school kuje, in Kuje Area Council respectively.

Performing the Commissioning ceremony, the representative of the Chief of Army Staff COAS and the Special Guest of Honour, who also doubles as the Director, Psychological Operations Department of Civil Military Affairs, Brigadier General Ojogbane Adegbe said the project which is part of the non kinetic face of the ongoing Exercise Enduring Peace for the year 2022 is aimed at impacting positively on the host communities where the operations have been conducted.

He added that the projects no doubt would address the acute water shortage been faced by the affected communities while also improving on their wellbeing as a community stressing that the Chief of Army Staff Lieutenant General Faruk Yahaya remains Committed to Partnering with Host communities to enhance positive civil military relationship across the country.

General Adegbe implored members of the benefiting community to cultivate good maintenance culture to manage and protect the projects so that it could serve them and at the same time stand the taste of time.
At the Government Secondary School Kuje where educational materials were donated to enhance learning, General Adegbe took time to inspire the elated students on career path with a seven-key guide to academic excellence and greatness in life.
Similarly in Danfara Community, the Brigade also carried out Free Medical outreach and distributed educational materials worth thousands of naira to Government Secondary School kuje.
In his welcome address the Commanding Officer 176 Guards Battalion Lieutenant Colonel Kolawole Adisa said the benefitting communities were selected based on the need assessment carried out during the kinetic phase of the Brigade exercise Enduring Peace carried out around the FCT and its environs

Also speaking during the event, the representative of the Commander Guards Brigade Col Peter Oyegoke said the Brigade remains committed to partnering with all communities to enhance actionable intelligence sharing and effective security of the Federal Capital Territory.
He noted further that more communities would benefit in future projects and urged them to continue to support the Nigerian Army and the Brigade to ensure effective security and defence of the nation’s seat of power.
The event ended with inter-agencies seminar which brought together all heads of security agencies within the federal Capital Territory. There was also presentation of souvenirs and group photographs.