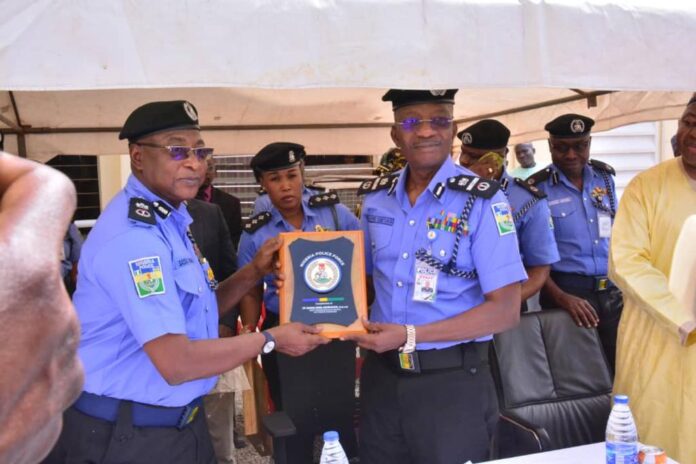 The Assistant Inspector General of Police (AIG) Zone 7 Police Command, AIG Kayode Egbetokun has directed operatives of the Nigeria Police Force (NPF), Federal Capital Territory (FCT) Command to “intensify stop and search operation” in the city ahead of the 2023 election.

AIG Egbetokun gave the directive during his familiarization visit to the FCT Command, on Wednesday.

He charged them to “intensify stop and search operation devoid of extortion, ensure efficient utilization of resources and build confidence.”

According to him, “We must reinvigorate stop and search, effectively manned black spots and sustain the present tempo in raid of criminal hide outs. Scavenging has been banned within the FCT. We mustn’t allow them to continue to operate.

“Modern policing is intelligence led, community based and technology driven. We must therefore work harder to enhance our intelligence capacity. We must improve on visibility policing. The recent deployment of newly passed out recruit constables is a big boost in this regard.

“We must sustain strategic partnership with other security agencies and other stakeho’ders. We must improve traffic control within the FCT. Traffic officers must be on their toes to ensure traffic flows within the FCT.

“Engage the local communities more in the policing of the communities, work together and in agreement to restore professionalism in the Police, intensify stop and search operation devoid of extortion, ensure efficient utilization of resources and build confidence.”

The AIG also said, though there were “pockets of incidents of armed robbery and kidnapping in the recent past, I must commend the effort of the Commissioner of Police FCT and his management team as well as all officers and men of the FCT command for several breakthroughs that have been recorded in recent times.

“There have been arrests of notorious kingpins, recoveries of arms and ammunition and rescue of kidnapped victims in the Suburbs of the FCT. I note with commendation your strategic partnership with other security agencies within the FCT. This goes to show that you are in tune with reality. The present challenges require a multifaceted approach and no single agency in the present circumstances can do it all alone.”

AIG Egbetokun further stated that, there is no doubt that the job of policing in Nigeria is a challenging one.

He said, “From my experience however, policing in the FCT is both challenging and interesting. The interesting part of it, is the way the challenges are being tackled. Policing anywhere is interesting when you are working hard and getting results, when you have men who are well trained, well equipped, well-motivated, when you have resources at your disposal to do your job and when you make sacrifices and people who you are serving appreciate your extra efforts.

“The resources available to us may not be in adequate measures but the good thing is that we have resources and we have hope of getting what we don’t have,” he said.

This is as he commended President Muhammadu Buhari for doing so much for the police, saying, “The Federal Government has supported the Police with modern equipment and recently increased the salary and allowances of the police.

“The Inspector General of police has gone a step further by ensuring that all the necessary arrears are being paid. Kits and accoutrement are being supplied routinely. The FCT administration recently assisted the command with 20 brand new operational vehicles fitted with communication gadgets we must reciprocate this gesture by discharging our duties professionally, responsibly and scaling up our service delivery.”

Egbetokun however, appealed for cooperation of members of the public, noting that “Policing is not a one man business. We all must collaborate and cooperate to archive our desires for security. Where the people cooperate with the Police the criminals find it difficult to operate.”

Meanwhile, the Commissioner of Police, FCT Command, CP Sadiq Idris Abubakar disclosed that, in compliance with the vision and mission of the Inspector-General of Police (IGP), Usman Alkali Baba, the Command under his watch has been able to develop and implement operational policies and strategies targeted at combatting crimes and criminality in the FCT.

In view of this, CP Sadiq stated that the Command has made modest achievements which includes the “arrest of 18 armed robbers and recovery of 1159 exhibits including arms and ammunition of various caliber, motor vehicles and motorcycles, illicit drugs and other harmful weapons. Equally, 24 kidnapped victims have been rescued and reunited with their families.

“The FCT Command under my leadership is committed to ensuring that the policing ideals of the Inspector-General of Police which has been effectively canvassed by the AIG in charge of Zone 7 are clearly and without doubt exemplified in the Command.

“Similarly, one of the foremost mandate of the Command is to deliberately entrench modern policing standards, particularly respect for the Rule of Law and the Fundamental Rights of all citizens.

“I hereby restate the unalloyed dedication of myself and my team to ensuring that the impact of the policies and operational directives of the AIG, and by extension the IGP, is vigorously pursued within the Command for the achievement of the policing mandate of the Nigeria Police Force,” assured.