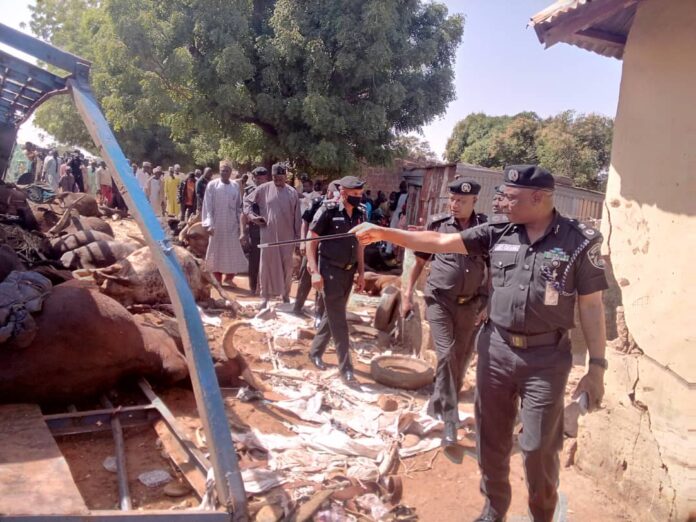 The CP has also condoled with the immediate families of the deceased.

According to statement by spokesman of the command, SP Nafiu Abubakar, “On January 15, 2023, at around 11.am, there was a fatal motor vehicle accident at Malisa village, Gwandu LGA, along Aliero/Sokoto road. The accident occurred when the yet to be identified driver of a truck with Reg. No. SRP 442 XA, Niger State, conveying passengers and cows from Illela LGA of Sokoto State, heading to Lagos State.
“ On reaching Malisa junction, the driver lost control of the truck and it feel down. As a result, fourty two passengers sustained various degrees of injuries.

“On receipt of the report, the Commissioner of Police, Kebbi State Command, CP Ahmed Magaji Kontagora instantly rushed to the scene, evacuated the victims to General hospital Gwandu, for treatment, where a medical Doctor confirmed Eighteen dead, while the remaining victims are currently responding to treatment. Similarly, sixteen cows also died as a result of the accident.

“CP Ahmed Magaji Kontagora also prayed for the souls of the departed to have an eternal rest and may their immediate families have the fortitude to bear the irreparable loss.

“The CP however calls on the NURTW, NARTO and other road users to always ensure they emplace adequate safety measures in their vehicles and be conscious while driving, with a view to preventing future reoccurrence.

“They are therefore advised to observe speed limit, avoid overloading, recklessness and be more careful while driving.”