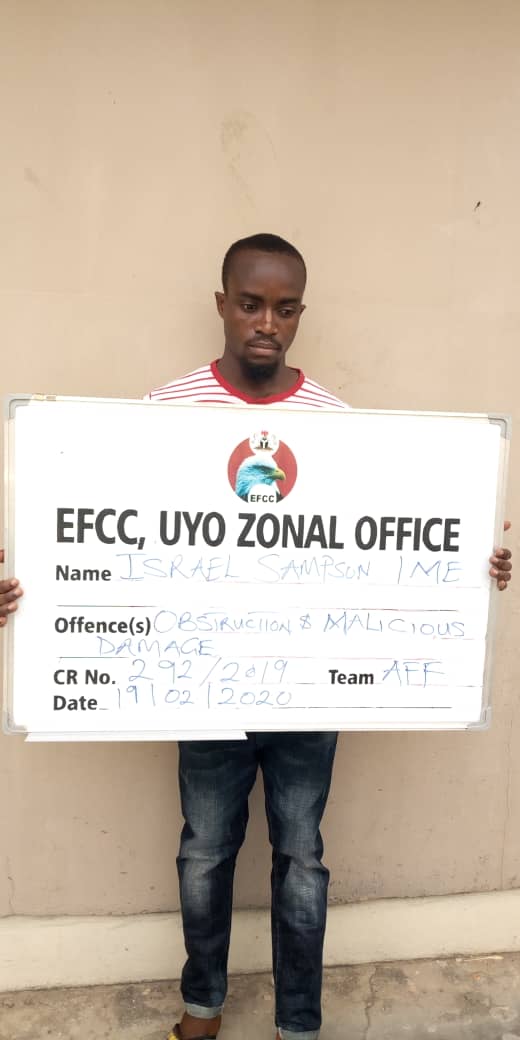 The Uyo Zonal office of the Economic and Financial Crimes Commission (EFCC), on Monday March 23, 2020, arraigned one David Sambo Idio and Israel Sampson before Justice Agatha Okeke of the Federal High Court sitting in Uyo, Akwa Ibom State on a one-count charge bordering on obstruction of justice. 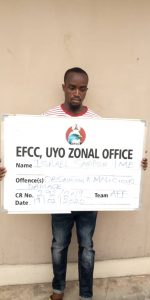 The operatives of the zone, in December 2019, visited Sunhill Farms in Ibiono Ibom Local Government Area of the state to arrest one Ubon Emmanuel Essien who is allegedly involved in a money laundering case. Upon arrival, the defendants alongside others who are currently at large, mobbed and attacked the operatives and damaged their Toyota Hiace bus.

The obstruction, made it possible for Essien to escape arrest.

The charge reads: “That you, David Sambo Idio  and Israel Ime Sampson on or about December 2019 in Uyo within the jurisdiction of this Honourable Court did wilfully obstruct authorized officers of the Economic and Financial Crimes Commission from conducting the entry, investigation and arrest of one Ubon Emmanuel Essien at Sunhill Farms in Ibiono Ibom Local Government Area of Akwa Ibom State in order to aid and facilitate Ubon Emmanuel Essien’s escape from the authorized officers of the Economic and Financial Crimes Commission and thereby committed an offence contrary to provisions of Section 38 (2) (a) of the EFCC Establishment Act 2004 and punishable under Section 38 (2) (b) of same Act.”

They pleaded “not guilty” to the charge preferred against them.

Counsel for the EFCC, Nwandu Ukoha, thereafter, asked the court for a trial date and for the defendants to be remanded in the custody of the Nigerian Correctional Service.

The matter has been adjourned to April 26, 2020 for hearing of bail application and April 29, 2020 for commencement of trial.

The defendants were remanded in the custody of the Nigerian Correctional Service.