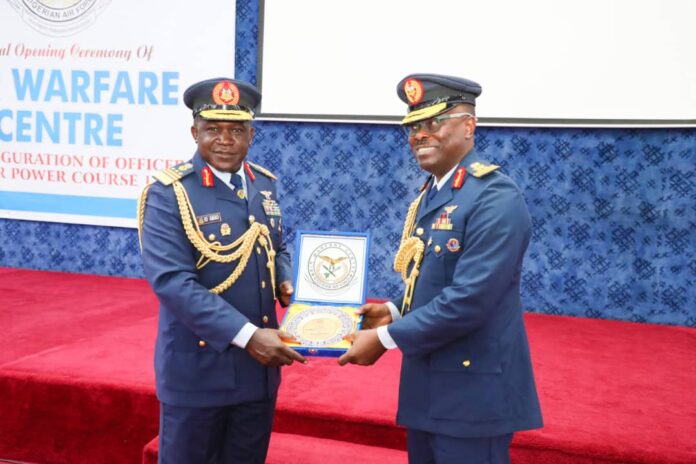 The Chief of the Air Staff (CAS), Air Marshal Oladayo Amao, has stated that lessons learnt by the Armed Forces of Nigeria from recent and ongoing operations across the country has further confirmed the dynamism of air power employment as critical to operational successes as well as meeting the safety and security aspirations of all Nigerians.

He stated this today, when he officially commissioned the Nigerian Air Force (NAF) Air Warfare Centre and inaugurated its first course on basic air power for young officers. Air Marshal Amao also noted that air power has become a key determinant of operational effectiveness, as well as a force multiplier in all ongoing operations in the country.

The CAS further stated that the reactivation of the Air Warfare Centre perfectly aligns with his Vision for the Nigerian Air Force, tailored towards, “enhancing and sustaining critical air power capabilities required for joint force employment in pursuit of national security imperatives”, just as it tallies with 2 key drivers of his Vision, which “focuses on doctrinal development and application of air power in joint military operations” as well as “pursuit of purposeful training and human capacity development”.

On the mandate of the Centre, Air Marshal Amao stated that the it must seek to support the airman across the spectrum of air warfare requirements; ranging from training and operational readiness, to doctrinal and tactics development. Such support, he noted, would enhance effectiveness by giving impetus to Service-wide efforts that will translate existing materiel and human capacity into actual capabilities to fulfil air power tasks demanded by national defence and security imperatives.

The CAS also charged the pioneer Commandant of the Centre, Air Vice Marshal Micheal Onyebashi and staff to prime the new institution for the highest standards and maximum impact, while ensuring that it evolves new and dynamic approaches for NAF employment of air power. This way, according to the CAS, the Centre will play a significant role in the efforts to apply the military instrument of power, so as to address the myriad of security challenges facing the nation.

He also appreciated members of the Air Power Consult for the development of the Air Warfare Centre’s curriculum and new doctrines that cut across most combat and combat support specialties of the NAF.

Earlier, Air Vice Marshal Onyebachi had observed that recent experiences and current realities in the various theatres of operations where NAF is engaged, underscored the imperative for a purpose-built institution focused on enhancing the effective and efficient application of airpower.

The situation, according to him, led to Air Marshal Amao putting together a body of officers made up of respected retired senior NAF officers known as the members of the Air Power Consult, to midwife the establishment of the re-engineered Air Warfare Centre. The commissioning of the Centre was thus a product of numerous strategic sessions and background work by the Consult, whose inputs were valuable in putting together the various curriculum for the programmes.

The Commandant lauded the visionary leadership of the CAS, who has continued to always seek, explore and invest in every venture that would advance the impact of airpower application in the security of Nigeria.He went on to add that the Centre is designed to be a special purpose vehicle to accelerate the drive towards doctrinal enquiry, review and development as well as purposeful airpower training and overall human capacity development in the NAF. He noted also that the objective of the Basic Air Power Course is to instil in young NAFofficers a level of airmindedness that would enable them apply their primary assignment to the overall objective of the NAF. The course, according to him, is well packaged not only to inform, but to also encourage active student participation, stimulate thoughts and incentivise self-study. The desired outcome he added, is to produce airpower practitioners who are sufficiently equipped to project and deliver the promises of airpower in line with contemporary and global best practices.

The establishment of an Air Warfare Centre for the Nigerian Air Force was first conceived in 2013 to develop operational and tactical doctrines, as well as provide integrated mission support training for enhanced joint force employment. Nonetheless, the Centre was only established on paper since then.  The Air Warfare Centre has a mandate to offer training which impacts positively on the effectiveness of Nigerian Air Force operations in theatres across the country. Based on this mandate, the Centre’s curriculum is intended to include doctrine development and operational-level training, as well as operational readiness assessment across all combat units.

The event was attended by Branch Chiefs and senior officers from the 3 Services.