Delta State Police Command at the weekend paraded 52 robbery, kidnapping and rape suspects before journalists in Asaba.Police Commissioner in the state, Ari Muhammad Ali, attributed the success recorded within the period when the suspects were arrested to team work with vigilante groups in various communities across the state.

Among the paraded suspects, was one Oniriode Oyiboehoro, the alleged author of the fake online report that led to the mob attack on policemen and setting ablaze of police station and patrol van along PTI Expressway, Effurun.

The suspects also include two alleged kidnappers; 22 years old Ogaga Champion and 27 years old Evans Emouariemu, who were arrested in a forest behind Ophori Agbarho Community.

The police boss said that Ogaga and Evans on February 8, 2020 while on a motorcycle armed with double barrel gun at Ehwerhe road Agbarho, blocked a driver of a Lexus Jeep simply identified as Emmanuel Piopo, pushed his girlfriend out of the vehicle and abuducted him, adding that the suspect upon interrogation, admitted committing the crime.

The commissioner said that when Kingsley Okonji was arrested by Operatives of x- squad,he mentioned the names of the three others who are at present are at large, adding that upon interrogation, a 35 year old suspect identified as Francis Odiwanor who claimed he owns a road construction company, denied ever participating in armed robbery.

Police arrest driver who knocked down cop in viral video 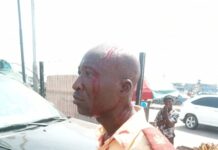 Society admin - March 1, 2021
0
By Ozioma Dibie   Friends, family and associates have rained encomiums on legal luminary, Dr. Valerie Azinge, a Senior Advocate of Nigeria (SAN). Some of them described...

Navy cautions over misinformation on piracy in Gulf of Guinea

National Securty admin - February 26, 2021
0
The Nigerian navy has decried the spate of inaccurate news around piracy activities in the Gulf of Guinea. In a statement by naval spokesman, Suleman...

Navy cautions over misinformation on piracy in Gulf of Guinea