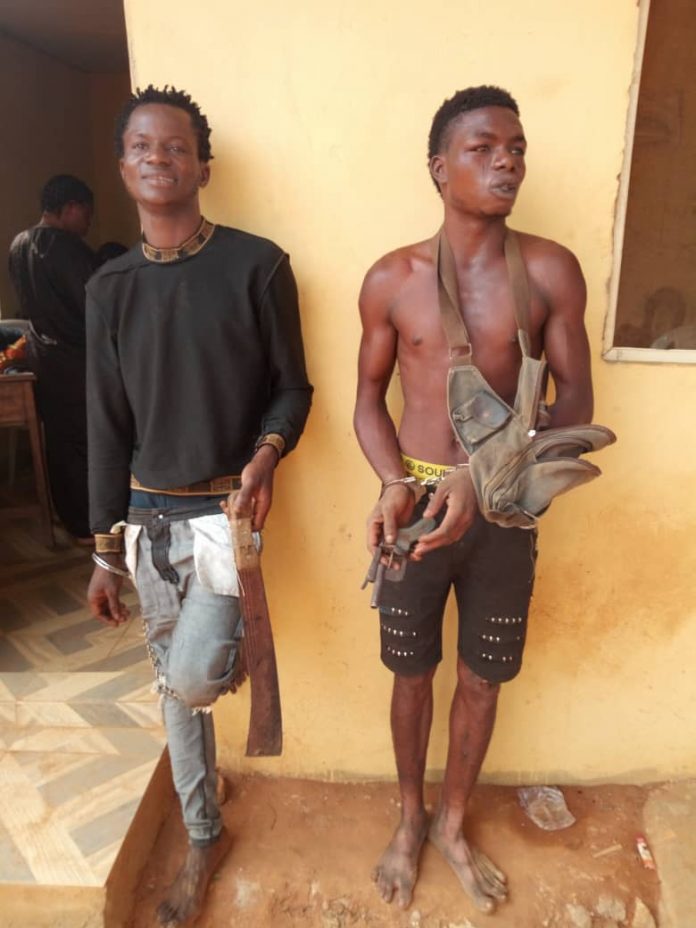 The suspects, according to Lagos police spokesman, Bala Elkana were arrested on Easter Sunday around 12.00 midnight acting on credible information.  “Operatives from Ikorodu police station supported by Special Anti-Robbery Squad (SARS) operatives deployed by the Commissioner of Police arrested one Toheeb Sanusi, 21 and Adewale Adeshina, 24, around Benson area, Ikorodu.

“One locally made revolver pistol and one cutlass were recovered from them. The suspects confessed that they were in the area to rob unsuspecting members of the public. Investigation is ongoing, the suspects would soon be charged to Court.

“The Commissioner of Police Lagos State, CP Hakeem Odumosu has given Commanders of tactical units in Lagos State a clear instruction do deal decisively with armed hoodlums daring the collective will of the command to rob in any part of the State during the lockdown.

A 28-year-old man was also nabbed by the command for allegedly raping an 8-year-old girl.

On April 9, 2020 around 8.pm one (name withheld) of Gegenla Area, Agunfoye, Ikorodu reported at Ikorodu Police Station that he returned home and met his 8 years old daughter (name withheld) in pains, complaining of discomfort and stomach aches.

The father left the girl with her two brothers, aged 10 and 12 as their parents are separated and living apart.  “On inquiry, she told her father that on March 31, 2020, one Adetayo Razaq, 28, of Alladi Ijelu Street, Agunfoye, Ikorodu gave her biscuits and took her to his room where he had carnal knowledge of her.

“The survivor has been taken to hospital for treatment and forensic examination. The suspect, a tiler and father of two, has been arrested by detectives from the Juvenile Welfare Centre, Ikorodu Police Station.

“The Commissioner of Police has directed that the case be transferred to Gender Unit, Command Headquarters, Ikeja for discreet investigation and diligent prosecution.”

Elkana who made the disclosure noted: “On April 11, 2020 around 3.pm, police received a distress call that one Dare, 16 and Fawas, 15, both residents of Epelemeje Orofun community, Akodo, Ibeju-lekki, allegedly got drowned while playing in the community beach.

“The command has deployed its Marine Police Team to the area on search and rescue operations.