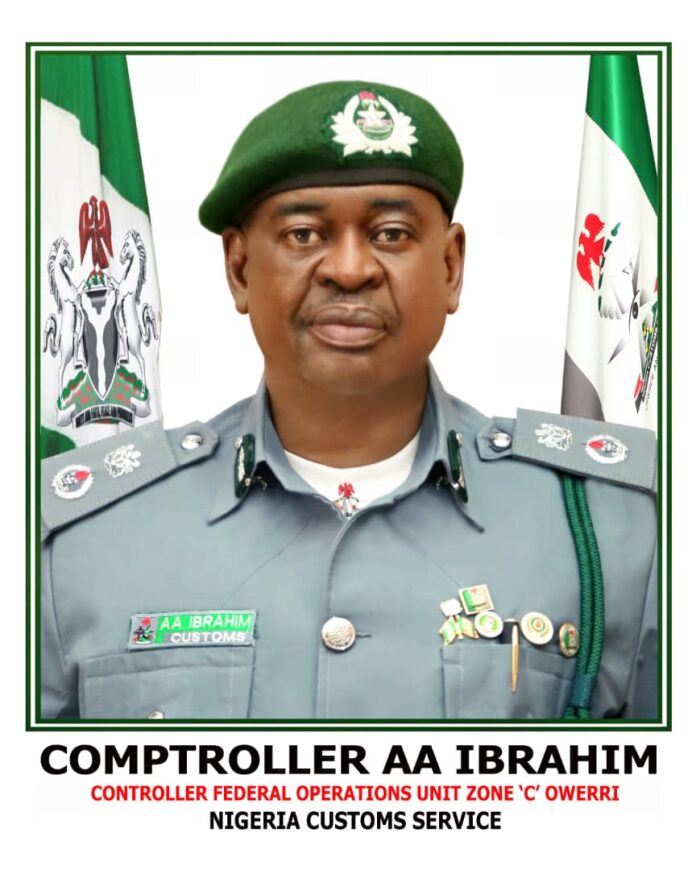 The Unit Controller of the Federal Operations (FOU) Zone C’, Owerri, Ali Ibrahim has vowed that Nigeria Customs under his Zone will not compromise on its constitutional mandate as regards national security.

Ali was honoured during the 31st Edition of the Annual Lecture/Awards of the Crime Reporters Association of Nigeria, (CRAN), which was held in Ikeja, Lagos State.

Comptroller Ali Ibrahim, who received CRAN’s Star Award For Anti-Smuggling, was among respected and deserving Nigerians recognized by the association for his gallantry, Revenue Generation in Zone C Command.

Ali said that inspite of insecurity problems in the Eastern region, Nigeria Customs under his Zone will not relent in its effort to put a stop to smuggling of dangerous products into the country.

Comptroller Ali Ibrahim stated that more intelligence is being applied now more than ever before in the anti- smuggling Operations of the customs in view of what looked like an unusual situation around the nation.

Corroborating the fact that South East used to be one of the peaceful zones in the country, the Controller stated that the ugly situation now is a temporary set back which will fizzle out with time, as every nation has its own difficult phase in history.

Ali Ibrahim stressed that there is no alternative to peaceful coexistence as that is the only way to engender a virile development of Amy country.

He said every security apparatchic has a role to play in sustaining national security, and the customs, being a major stake holder especially in curtailing the influx of arms smuggling will not fail to maintain the tempo.

According to him, citizens must do everything possible to coexist as suspicion and internal strife were the forerunners of any country’s disintegration.

Making reference to the Sahel region where peace has almost eluded them as a result of internal strife he was of the view that tribal sentiments or religious intolerance must take the back seat if any nation must move forward.

Ali Ibrahim said his Unit will key into the mandate given to it by the Comptroller General which centred on the extant laws of the service in promoting security of lives by preventing importation of uncustomed or prohibited items nipping in the bud evasion of duties, facilitation of lawful trade as well as protection of the economy.

He spoke of the Unit’s desire to make striking or spectacular seizures across the States in the south, as that would be the major yardstick to hold a briefing in no distant future.

Reminded that since he mounted the rostrum, seized goods have been a constant feature and that his officers especially on the Benin axis were harvesting seizures that can make headlines, he agreed but stated that views differ, in this instance as few may not see such intercepted goods as worthy to attract any briefing yet.

“We are looking forward to magnificent seizures to enable us converge here for a briefing before the year runs out.” he said.

Noting that the pen is mightier than sword, Ibrahim went on to state that all security agencies as well as state actors must synergies to be able to surmount the present insurgency in the country.

He added that positive media will build the nation than destroying it.