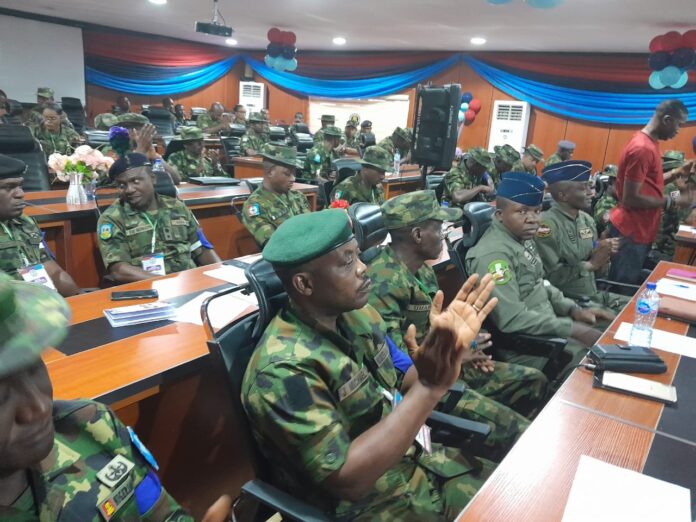 The Chief Defence Staff (CDS), Gen. Lucky Irabor, has hinted on the need for joint planning and execution of combat operations by all security agencies in the country.
Irabor made the call on Friday at the closing of the week-long Joint Simulation Exercise (JSIMEX) for Operation Whirl Punch (OPWP) held at the Land Forces Simulation Centre Giri, outskirts of Abuja.

The CDS was represented by the Director of Operations, Defence Headquarters, Rear Admiral Dahiru Amos.

He said the conduct of the joint simulation exercise was the first step towards strengthening OP Whirl Punch and other ongoing operations across the country.
He noted that it was in line with his vision of fostering a professional Armed Forces capable of effectively meeting constitutional imperatives.
According to him, the exercise has provided the needed opportunities for observations, critique and after-action review and wash up.
“This would further strengthen our efforts at identifying the gaps hindering the attainment of joint operational objectives.
“It is my believe that this exercise has enabled other opportunities for enhanced competencies at testing, conducting and evaluating, as well as analysing the effectiveness of our combat readiness and operations.
“Most importantly, the JSIMEX has shown the relevance of synergy in joint planning and execution of combat missions in the contemporary security environment,” he added.
Irabor pledged to sustain and broaden the scope of the exercise to enable the three services to participate actively.
He urged those who participated to bring to bear, all the lessons learnt from the exercise in the execution of ongoing operations across the country.
The CDS commended the Land Forces Simulation Centre for the successful conduct of the exercise in a conducive environment.
According to him, the exercise has outlined the need for joint and effective planning and coordination within the armed force towards bringing counter-terrorism, counter-insurgency and anti-banditry efforts to favourable conclusion.
“I urge the Director General, Land Forces Simulation Centre not to rest on his oars as he envisages application of knowledge and lessons learnt in subsequent JSIMEX,” he added.