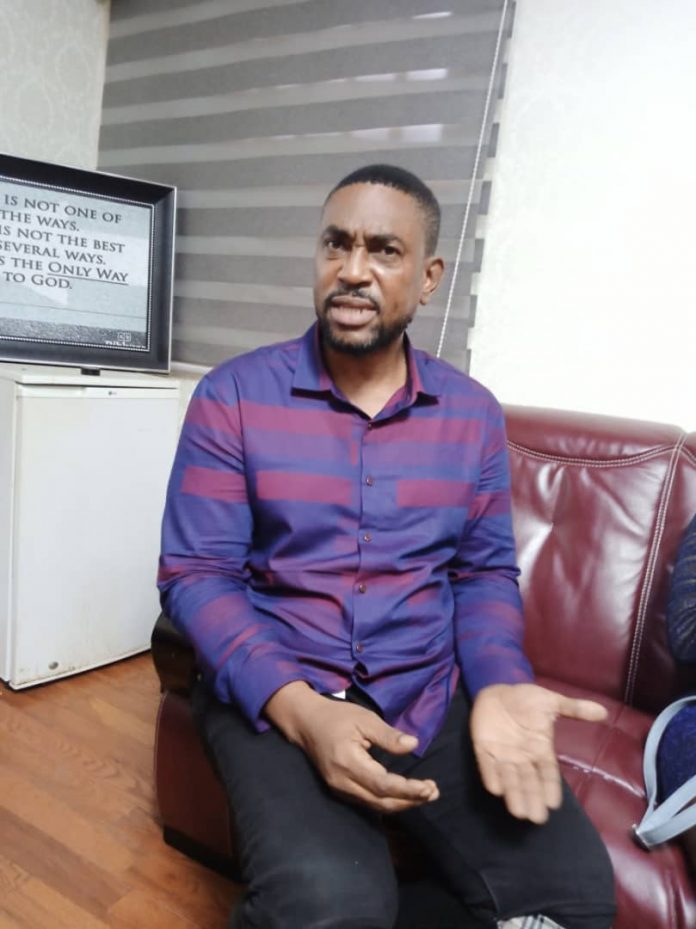 But the suspect who is said to be a co-owner of De Cave, a sprawling night club on Joel Ogunaike Street, Ikeja GRA flatly denied the allegation stressing that all that transpired in the hotel room between him and the survivor was based on mutual agreement.

Narrating how she met Mr. Aderemi “who later turned a monster”, the undergraduate student who claimed to also do part-time work with a graphic design outfit at the Ikeja shopping Mall said it all started on Sunday January 19, 2020.

“It was a security man at the Mall who gave me a call card that a certain man (points at him) who said he likes my shape and dressing said he should give it to me and that I should call him. That day, I didn’t really see him; I only saw his back while leaving the Mall. So the following day, I called him and he asked that we should meet and hangout. He asked me to pick an Uber or Taxify to meet him somewhere at Opebi, which I did and the fare was N2,000 and he paid. I joined him in his car and he drove me to a local joint along PWD where he bought me a plate of pepper-soup and drink. I wasn’t comfortable with the place and I told him that I wanted to leave but he pleaded with me that we were still going somewhere better.”

Continuing, she said “He then drove me to De Cave on Joel Ogunaike and introduced me to those we met there and we exchanged banters. But when it was past 9.00pm I told him I wanted to go home, which he consented to and called an Uber for me but later canceled it and pleaded that I should simply accompany him to his hotel, Oakland Hotel on Allen Avenue so he could pick his luggage; making me believe that he just arrived the country from the US. The arrangement was that I would remain in the car while he hurries up to pick his belongings but all that changed when we got to the hotel. He again pleaded with me to give him a helping hand with his luggage; that was how we entered the hotel room. I was surprised when we got to the hotel room, he pulled off his clothes, fell into the bed and asked me to join him. It was shocking. He requested for a bottle of beer and started drinking and smoking asking if I needed to drink but was distraught and made for the door. But he sprang up and dragged me to the bed, flipped up my skirt and forced himself inside me. He was able to do it with ease pressing hard on my neck and because I wasn’t wearing any undies except this skirt because wearing undies give me rashes. But when I discovered that he was calm and wanted to start jerking, I pushed him out and started banging the door which attracted the hotel management. I called my uncle abroad who is a Mayor and he contacted senior army personnel who then sent in some soldiers to the hotel and the rapist was apprehended and handed over to policemen from Area “F.”

But the Esan, Edo State born Real Estate Agent and hotelier who consented to all that the survivor claimed however, denied raping her.

“All that she said is correct but that I raped her was a lie. Everything was mutual and we were bonding. She pulled her skirt by herself and that was when I discovered that she wasn’t wearing a pant or tight which ladies put on. We were both naked on the bed and our conversation was mutual until she brought the issue of N300,000, that I should assist her to open a graphic design shop; that she is a graphic designer. My body just went down and I stood up. She too stood up and said she was going since I didn’t want to say anything concerning her request; and this was about 1.00am. Because I felt it was late for her to go, I locked the door and kept the key but she started banging the door and screaming. At a stage she said if it was the N2.000 Uber money I paid for her she would refund it and I said do it and she immediately transferred the money to me boasting that she may be a young girl, but that she had dated over 1000 men; most of them very rich. It was her scream that attracted the hotel management who in turn invited the soldiers and later the Police.”

It was not possible to get the reaction of the Lagos State Police Command public relations officer, DSP Balla Elkana on the issue as calls put across his line rang out. He has yet to also respond to a text message sent to him as of the time of filing this report. But a source close to Area ‘F’ Command Headquarters which is investigating the incident said the suspect would be charged to court.