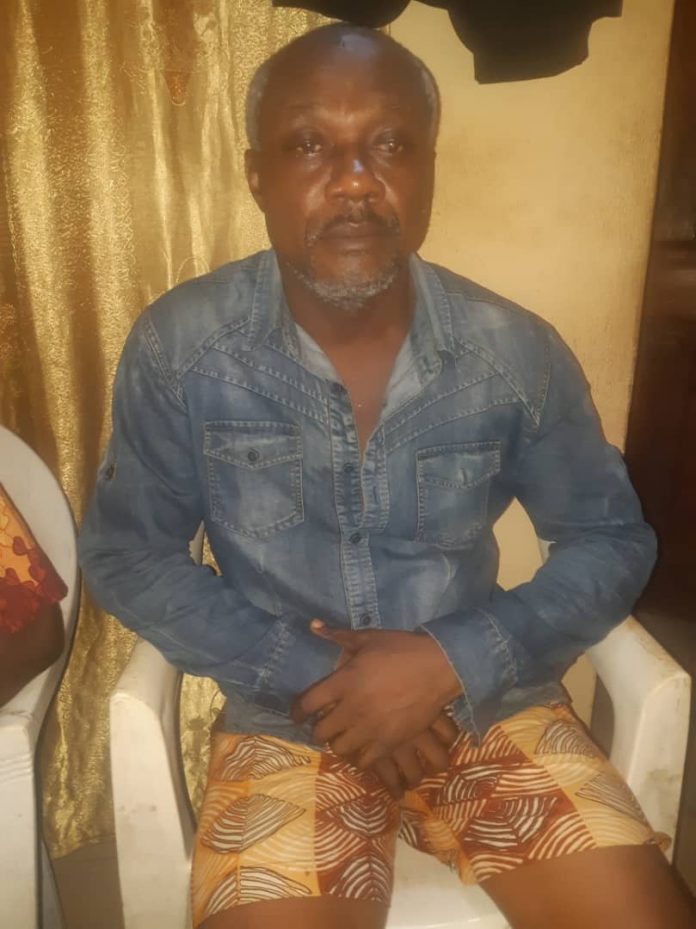 A 53-year-old beer palour owner, Obioma Dennis, has admitted killing one of his customers out of anger.  According to him, the deceased and two of his friends who were smoking Indian hemp in front of his joint had attacked him for rebuking them.

The suspect who is being detained at the Homicide section of the State Criminal Intelligence and Investigations Department (SCIID), Panti Street, Yaba, under the watch of DCP Yetunde Longe, attributed his action to the handwork of one of his competitor and hilandlord who may have charmed him.

He said: “I regret my action because the deceased is a young man I know. I stabbed him in anger”.

Narating how the whole drama started, he said that he got three telephone calls from an unknown numbers on January 22, 2020, being the day of the unfortunate incident.

He said that he rushed to his bar located at number 17 Jogosimi Street, Alausa Ikeja, which is opposite his residence, only to see the deceased, one Ifeanyi and two others smoking weed suspected to be Indian hemp in front of his bar.

According to him, all efforts to make these customers  desist from further smoking in front of his bar fell on deaf ears.

“In rage, I grabbed hold of the chair they were sitting on, which is mine and threw them into my shop. While I was inside my shop, one of the guys who I later identified as Emeka started destroying my electronic appliances. He smashed my television. To save what was left of my belongings, I pushed him out of my shop. The next thing I saw is that Ifeayi grabbed a beer bottle and smashed it on my head. I ran into the inner part of the shop where we prepare food.

“I grabbed one of the kitchen knives and stabbed Ifeanyi on his chest. He fell down in a pool of blood holding his chest.

“I regret my action now because Ifeanyi is like my younger brother. I contributed cash when his father died three years ago. If I was not gripped by anger I don’t think I would see myself killing anyone”, he said.

The police said that the suspect was arrested and detained at Alausa Police Station but that the case was later transferred to SCIID, Panti for elaborate investigation.

“It is a clear case of culpable homicide. The case would be charged to court at the end of investigation’, the police said.